The Perfect Murder: A Study in Detection (Paperback) 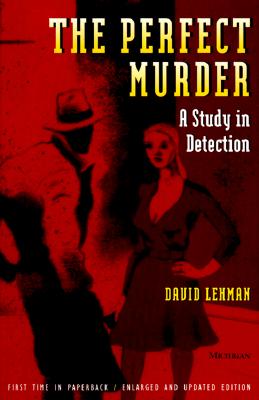 The Perfect Murder: A Study in Detection (Paperback)


Email or call for price
In this lively, enjoyable look at the best American and British detective fiction, David Lehman investigates the mystery of mysteries: the profound satisfactions we get from evil, disorder, mayhem, and deception--that we know will be put right by the last page.
As Lehman shows, the detective story draws deeply from ancient storytelling traditions. The mystery's conventions--the locked room, the clue "hidden" in plain sight, the diabolical double, the villainous least likely subject--work on us as childhood fairy tales do; they prey upon our darkest fears, taking us to the brink of the unbearable before restoring a comforting sense of order. The myth of Oedipus, for example, contains the essential elements of a whodunit, with the twist that the murderer the detective pursues is himself.
With their wisecracking gumshoe heroes, Dashiell Hammett and Raymond Chandler fashioned an existential romance out of the detective novel. More recent writers such as Ross MacDonald, P. D. James, and Ruth Rendell have raised the genre to a new level of psychological sophistication. Yet the form evolves still, and Lehman guides us to the epistemological riddles of Jorge Luis Borges and Umberto Eco, who challenge the notion of a knowable truth. Originally published in 1989, this new edition features an additional chapter on the mystery novels of the 1990s.
"A lively study of the development and varieties of the detective story since Poe, its relations with other forms high and low, and the latter-day appropriation of its techniques by such writers as Borges and Eco. . . . A thoroughly intelligent and readable book." --Richard Wilbur, Pulitzer-Prize winning poet
David Lehman is the series editor of both the The Best American Poetry, published by Scribner, and the Poets on Poetry series published by the University of Michigan Press. He is a former Guggenheim Fellow in poetry, a vice president of the National Book Critics Circle, and the author of several books of criticism and collections of poems.