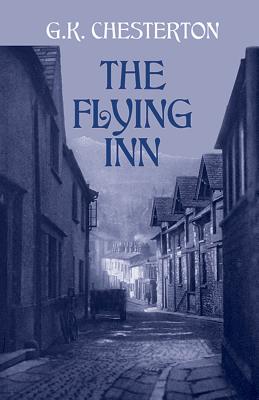 
Email or call for price
An exuberant man as well as a prolific and gifted writer, G. K. Chesterton (1874-1936) was a man with very strong opinions -- and extremely capable of defending them. In this hilarious, satirical romp, Chesterton demonstrates his intense distrust of power and "progressives," railing against Prohibition, vegetarianism, theosophy, and other "dreary and oppressive" forces of modernity.
In a spirited response to the government's attempt to curtail alcohol sales, Humphrey Pump (called Hump) -- a pub owner in the fishing village of Pebblewick -- takes to the road in a donkey cart. Accompanied by Captain Patrick Dalroy, a crimson-haired giant with a tendency to burst into song, Hump provisions the cart with a cask of good rum, a giant round of cheese, and the signpost from his pub, The Flying Inn. Together, the two men extend good cheer to an increasingly restless populace as they attempt to evade Prohibition. In a journey that becomes a rollicking madcap adventure, the two travel round England, encountering revolution, romance, and a cast of memorable characters.
Sure to receive an enthusiastic welcome from Chesterton fans, this new edition of an old classic will also appeal to anyone who enjoys a humorous, well-crafted tale.
Widely known as the "Prince of Paradox," G. K. Chesterton was one of the most influential English writers and thinkers of the 20th century. Chesterton's prodigious talents embraced a wide range of subjects, from philosophy and religion to detective fiction and fantasy. And while his writings are light and whimsical, they are filled with direct and honest truths.