Face to Face: The Photographs of Camilla McGrath (Hardcover) 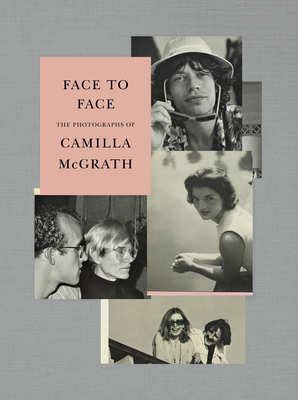 A revelatory collection of behind-the-scenes photographs of celebrities and cultural icons—from Joan Didion to the Rolling Stones to Nancy Pelosi. Featuring short essays from Fran Lebowitz, Harrison Ford, and more.

Camilla Pecci Blunt, a nonprofessional photographer who grew up between Italy and New York, was well placed to forge the path she did. Her mother was passionate about the arts, took photographs, painted, and collected artists around her, and had galleries in Rome and New York. The more than six hundred photographs in this book from the 1950s to the early 1990s capture our cultural icons in casual, playful moments.

Andrea di Robilant's essay, along with memories from Griffin Dunne, Vincent Fremont, Harrison Ford, Fran Lebowitz, and Jann Wenner, reveal the backstory of this irresistible look at the larger-than-life cultural figures of our time as you have never seen them.

CAMILLA MCGRATH (1925-2007) was born in Paris in 1925 and, over the course of her life, took more than sixty thousand photographs of her family and celebrated friends in Europe, New York, and California. ANDREA DI ROBILANT is a journalist and the author of five books of nonfiction, most recently Autumn in Venice: Ernest Hemingway and His Last Muse. He lives in Rome. GRIFFIN DUNNE is a director, writer, and actor. He lives in New York. VINCENT FREMONT is one of the founding directors of the Andy Warhol Foundation for the Visual Arts. He is currently working on a variety of projects in the art and entertainment fields. HARRISON FORD is by profession an actor. He also serves as vice chair on the board of Conservation International. FRAN LEBOWITZ lives in New York City where she divides her time. JANN WENNER is the founder of Rolling Stone and lives in New York City.

"[A] spectacular collection of images from the personal archives of Italian countess Camilla McGrath (1925–2007). McGrath and her husband, Earl—at various times a screenwriter, record producer, and art curator—had an outsized social life, and the sheer number of celebrities who passed through their orbit is mind-boggling. Among the photographs are ones capturing Jackie Kennedy lounging by a pool, Andy Warhol smiling alongside his dachshund Archie, and vacation shots with Princess Margaret and Bianca Jagger. As art dealer Beatrice Monti remembers of McGrath’s gift, “She was able to capture something of each one of us even in the middle of a party.” . . . These spellbinding photos will beguile photographers, artists, and those enamored of the glamour of a bygone era."
—Publishers Weekly

“Imagine the one, single, not-so-large apartment that most completely embodied the glamorous, laughing, center-of-the-universe New York one always wished to be a part of—either looking out at the walls (filled with captivating pictures) or looking into the room (filled with captivating people, not the least of them our two hosts)—well: this was that place; and Camilla McGrath, often without even standing up, took the photographs. Every page of this wonderful book is a brilliantly entertaining example of her life's project. A perfect time-machine.” —Wes Anderson

“Face to Face reveals the celebrated, the notable, the unknown, and whatever pleased Camilla McGrath’s eye. This book’s effect is to remind us what McGrath saw as she took aim:
the fleeting nature of the occasion, the truths buried in the heart of the ephemeral.” —Hilton Als

“She knew everybody who was anybody. Camilla McGrath was the irreverent, aristo-bohemian wife of the larger-than-life art gallerist and music producer Earl McGrath. Together, the glittering couple were in every swim, their circle spanning the worlds of entertaining, film, music, the arts, and society in Europe, New York, and Los Angeles. . . . These good times were invariably captured on Camilla’s Nikon camera, and the thousands of black-and-white photographs became her life’s work, until her death in 2007, but few have ever been published. A collection of more than 600 photographs from the 1950s to the 1990s appears in Face to Face, which includes reminiscences by Fran Lebowitz and Harrison Ford among others, is a rarefied window onto the last century.” —Heather Hodson, Avenue

"A gorgeous, jet-set testament to the delicious depth of the McGraths’ personal address book. Culled from Camilla’s photo albums, which have recently been bequeathed to the New York Public Library, the book documents the warm, relaxed intimacies of Keith Haring, Andy Warhol, Mick Jagger, and Paloma Picasso at a birthday party for Jerry Hall in 1985; the Dunnes (that’s Joan Didion and John Gregory) at Thanksgiving in 1992; the Agnellis on their yacht; Jackie and Lee on a sisterly trip to Italy; Peter Beard in the Hamptons; Harrison Ford chatting up Carrie Fisher in a doorway; and the carousing of everyone from New York’s Frank O’Hara to Los Angeles’s Sharon Tate. Examining Camilla’s tender, unassuming portraits, one doesn’t get the sense of a predatory paparazzo behind the lens, but rather a close friend shooting someone in a moment of letting their guard down. These are larger-than-life figures brought down to coffee-table size." —Christopher Bollen, Interview

"Iconic photos of Jackie Kennedy, Andy Warhol, Sharon Tate, Truman Capote, and more are included in this collection of more than 600 shots by the famed photographer Camilla McGrath. But the photos aren't the only reason to dive in; remembrances of the legendary lenswoman by the likes of Griffin Dunne, Harrison Ford, and Fran Lebowitz are included to help make this the rare coffee table book that's as exciting to read as it is to look at."—Town & Country

"No photographer was better positioned to get publicity than the late Camilla McGrath . . . Camilla documented her social life extensively, amassing 103 albums’ worth of gatherings like Jerry Hall’s baby shower and Anjelica Huston’s wedding. But, considering them private mementos, she never sold nor even exhibited them. Now that they finally have come to light, in the book
Face to Face: The Photographs of Camilla McGrath, it’s understandable why." —Stephanie Eckardt, W Magazine

"There is a marvelous sense of candor and intimacy to [McGrath's photographs], which capture, in their totality, an incredibly full and joyful life." —Thessaly La Force, The New York Times Style Magazine

"Candid party photos by the late Italian socialite Camilla McGrath, collected in the new book Face to Face, are a treasure trove of celebrities at play in the 1960s, 70s and 80s . . . A stunning collection." —Sandra Sobieraj Westfall, People

“From the 1950s to the ’90s, the socialite captured casual moments with some of the biggest names in entertainment. More than 600 of her photos are here, with text from the likes of Harrison Ford and Fran Lebowitz.” —The New York Times (“New & Noteworthy”)