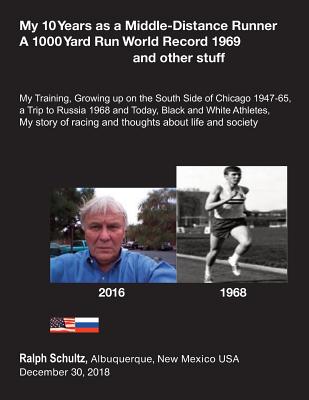 If you ever wanted to know how a World Record Middle-Distance runner trained from 1963-1971 and his thoughts about racing and life in America this is the book for you. He presents his ideas as a dialogue to the reader in everyday language with a touch of humor. You will get a look at aspects of growing up on the South Side of Chicago in the 1950's in an ethnic Slavic working class neighborhood and becoming a world class athlete who graduated from world class universities, Northwestern and The University of Chicago. He provides his exact workouts that led to a spectacular racing season in 1969 that ended with a 1000 yard run world record tie with Peter Snell, the Olympian from New Zealand. The training is for the 18-30 year old runner who is still competing and training independently who still aspires to greatness and improvement and is looking for a system that works. He offers to coach you using cyber technology worldwide. You will have an e-mail discussion board to communicate with athletes worldwide. The book is illustrated with 100 photographs of running and Chicago landmarks, many in color.

The author relates his experiences in Russia during 1968 on a college cultural trip, how he trained preparing for the US Olympic tryout, interesting people he met, and Moscow and the Soviet Union.

He comments about black and white athletes he knew, and has a dedication to Ted Haydon, the respected icon of track and originator of the University of Chicago Track Club. He tells the story of competing on the National Champion UCTC 2-mile relay team.

The author is an economics professor. He digresses to offer some observations about the US Economy and Russian foreign policy today. These are further analyzed in depth in an upcoming book.