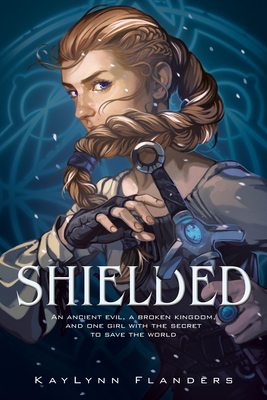 This is book number 1 in the Shielded series.

For fans of Sorcery of Thorns and Furyborn comes a thrilling new fantasy about a kingdom ravaged by war, and the princess who might be the key to saving not only those closest to her, but the kingdom itself, if she reveals the very secret that could destroy her.

The kingdom of Hálendi is in trouble. It's losing the war at its borders, and rumors of a new, deadlier threat on the horizon have surfaced. Princess Jennesara knows her skills on the battlefield would make her an asset and wants to help, but her father has other plans.

As the second-born heir to the throne, Jenna lacks the firstborn's--her brother's--magical abilities, so the king promises her hand in marriage to the prince of neighboring Turia in exchange for resources Hálendi needs. Jenna must leave behind everything she has ever known if she is to give her people a chance at peace.

Only, on the journey to reach her betrothed and new home, the royal caravan is ambushed, and Jenna realizes the rumors were wrong--the new threat is worse than anyone imagined. Now Jenna must decide if revealing a dangerous secret is worth the cost before it's too late--for her and for her entire kingdom.

"YA fantasy at its most fun."--DANA SWIFT, author of Cast in Firelight
KayLynn Flanders is a graduate of Brigham Young University, with a degree in English Language and a minor in editing. When she's not writing, she spends her time playing volleyball, reading, and traveling. She lives in Utah with her family, and is the author of Shielded and Untethered. To learn more about KayLynn, go to kaylynnflanders.com or follow @kaylynnflanders on Twitter.
A Whitney Award Nominee

“A gorgeous fantasy that captivates from beginning to end, and a fierce heroine every reader will root for.” —KATHRYN PURDIE, #1 New York Times bestselling author of Burning Glass and Bone Crier’s Moon

“Beautiful writing, wondrous world building, and enchanting characters. This is YA fantasy at its most fun.” —DANA SWIFT, author of Cast in Firelight

“Intrigue, betrayal, and magical battles follow as . . . Flanders injects humor and a touch of
romance into this suspenseful debut novel packed with twists, turns, joy, and sorrow, and the first-person narrative runs the gamut of human emotion. The ending promises a sequel to an
excellent start.” —Booklist

“[Shielded has] affable characters and moves at a solid clip that will keep readers entertained . . . with its mix of magic and political intrigue.” —Kirkus Reviews

“Weaving action, intrigue, and romance into a fast-paced tale . . . there’s plenty to enjoy in this series opener.” —Publishers Weekly