One Flew Over the Cuckoo's Nest (Hardcover) 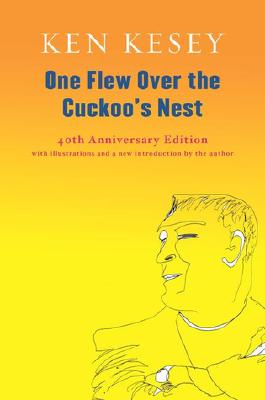 An international bestseller and the basis for a hugely successful film, Ken Kesey's One Flew Over the Cuckoo's Nest was one of the defining works of the 1960s. Marking the fortieth anniversary of Viking's publication of this American classic, this deluxe hardcover edition includes a new introduction by Robert Faggen and drawings Kesey made when he worked at the psychiatric hospital that was the inspiration for the novel.

A mordant, wickedly subversive parable set in a mental ward, the novel chronicles the head-on collision between its hell-raising, life-affirming hero Randle Patrick McMurphy and the totalitarian rule of Big Nurse. McMurphy swaggers into the mental ward like a blast of fresh air and turns the place upside down, starting a gambling operation, smuggling in wine and women, and egging on the other patients to join him in open rebellion. But McMurphy's revolution against Big Nurse and everything she stands for quickly turns from sport to a fierce power struggle with shattering results.

With One Flew Over the Cuckoo's Nest, Kesey created a work without precedent in American literature, a novel at once comic and tragic that probes the nature of madness and sanity, authority and vitality. Greeted by unanimous acclaim when it was first published, the book has become an enduring favorite of readers. This new edition-modeled on the popular fortieth-anniversary edition of Jack Kerouac's On the Road-will bring Kesey's genius to a new generation while delighting his loyal fans.