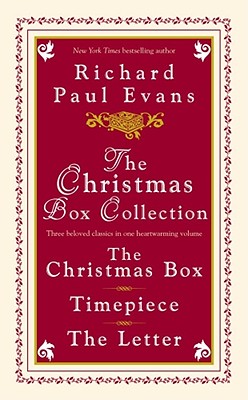 
Email or call for price
Richard Paul Evans' #1 New York Times bestseller The Christmas Box has become a holiday classic, a tale so touching that it continues to "tug families' heartstrings" (USA Today). His exquisite prequel, Timepiece, and The Letter completed the glorious trilogy of the Parkin family. Now all three magical stories are compiled in one extraordinary treasury that -reaches into that place where all broken hearts will forever be made whole" (The Star, Chicago).
The Christmas Box
A Christmas story unlike any other, The Christmas Box is the poignant tale of a widow and the young family who moves in with her. Together, they discover the first gift of Christmas -- and what the holiday is really all about.
Timepiece
Tracing the lives of a young couple as they discover love, loyalty, and the power of forgiveness, Timepiece is a tale of wisdom and of hope -- and a gentle reminder that the connections from one generation to the next are indelible.
The Letter
A mysterious letter is found at the grave of a couple's only child in this unforgettable conclusion to the collection. As they face love's greatest challenge, they find its truest meaning and learn the lessons that are echoed throughout.
Richard Paul Evans is the #1 New York Times and USA TODAY bestselling author of more than forty novels. There are currently more than thirty-five million copies of his books in print worldwide, translated into more than twenty-four languages. Richard is the recipient of numerous awards, including two first place Storytelling World Awards, the Romantic Times Best Women’s Novel of the Year Award, and is a five-time recipient of the Religion Communicators Council’s Wilbur Awards. Seven of Richard’s books have been produced as television movies. His first feature film, The Noel Diary, starring Justin Hartley (This Is Us) and acclaimed film director, Charles Shyer (Private Benjamin, Father of the Bride), will debut in 2022. In 2011 Richard began writing Michael Vey, a #1 New York Times bestselling young adult series which has won more than a dozen awards. Richard is the founder of The Christmas Box International, an organization devoted to maintaining emergency children’s shelters and providing services and resources for abused, neglected, or homeless children and young adults. To date, more than 125,000 youths have been helped by the charity. For his humanitarian work, Richard has received the Washington Times Humanitarian of the Century Award and the Volunteers of America National Empathy Award. Richard lives in Salt Lake City, Utah, with his wife, Keri, and their five children and two grandchildren. You can learn more about Richard on his website RichardPaulEvans.com.
Orlando Sun Sentinel The book's timeless message is appropriate for any season....The Christmas Box is an artful blend of fiction and inspirational writing. It is a memorable tale whose universal message will not fade with the season.

The Star (Chicago) Richard Paul Evans is a good writer. His style is crisp and uncluttered.

The Daily Sun A sweet and tender love story...The Letter should satisfy Evans' many fans and find him new ones too....On one of these cold winter nights find a comfortable place and settle down and read The Letter....When it is over you will feel warmed and enriched by the story you have shared.