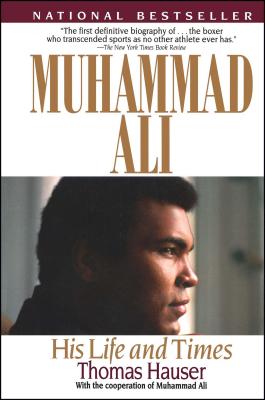 In the words of more than 200 of Ali’s family members, opponents, friends, world leaders, and others who have known him best, the real Muhammad Ali emerges: deeply religious, mercurial, generous, a showman in and out of the ring.

Thirty years after he burst onto the scene as a gold medal light-heavyweight at the Rome Olympics, Muhammad Ali is still a magical figure. His accomplishments in the ring were the stuff of legend—the two fights with Sonny Liston, when he proclaimed himself “The Greatest” and proved he was; the three epic wars against Joe Frazier; the stunning victory over George Foreman in Zaire; and the shocking loss and final win that made him the first man to win back the heavyweight crown twice, fourteen years after he had first claimed it.

Ali’s life has been played out as much on the front pages as on the sports pages. With brilliant immediacy and unprecedented candor, bestselling author Thomas Hauser recreates this extraordinary man.

Thomas Hauser is a New York City attorney, Pulitzer Prize nominee, and the author of fourteen books, including Missing, which became the Academy Award–winning film, and The Black Lights: Inside the World of Professional Boxing.

The New York Times Book Review The first definitive biography of...the boxer who transcended sports as no other athlete ever has.

Budd Schulberg Chicago Tribune How many Muhammad Ali's have we seen during his tempestuous ride through 30 years of roller-coaster American history? Ali rode that roller coaster with zest and pride and humor and class.

Publishers Weekly A feast for fans, this composite portrait bristles with insights, jabs, and tributes.

The Sporting News Compelling...I doubt that we shall ever see a more comprehensive portrait of this extraordinary athlete.

The Nation A new generation is about to rediscover this exemplar of the Zeitgeist of the 1960s....The awesome pressures mortals can't imagine...were somehow converted into motivation by Ali. And this comprehensive, poignant and knowing book is sure to be a catalyst of his coming renaissance....Ali was bigger than boxing, and so is this book.

New York Post Muhammad Ali: His Life and Times is a measuring stick for at least three decades of America -- who we were, how we changed and what we became.

New York Daily News Extensive and fascinating detail; first-rate....The triumph of the "witness" technique in biography may be judged complete.

The Boston Globe A magnificent book [about] a life that needs to be understood whether you care a whit about boxing or not.

National Public Radio You're liable to find Muhammad Ali in the sports section of your bookstore, and that's certainly one place it belongs. Ali was a massive presence in sports for decades. But this book should be in the biography section as well, because like all good biography, it teaches us something about what it means to try to make a meaningful life in this slippery world. And it should be in the history section, because Ali has been a force in contemporary events second to no American.