From the Old Marketplace (Paperback) 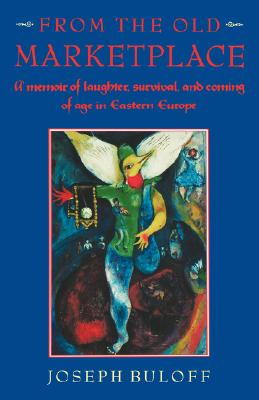 From the Old Marketplace (Paperback)

A young Jewish boy the old, much-fought-over city of Vilnius the rumblings and then the reality of World War I all combine in this book to create a striking historical document of a period during which Europe and the Western world were changed forever. In the streets and alleys of Vilnius actor Joseph Buloff came of age, learning the arts of shape-altering necessary for survival during successive occupations by Cossacks, Germans, Bolsheviks, and Poles; it is this fascinating vanished milieu that he brings to life in "From the Old Marketplace."

For a little boy, the old marketplace was full of enchantment, a world in itself, and Buloff brilliantly describes the eccentric inhabitants who peopled his childhood: Berchick the orphan, Barve's son the intellectual and historian, the starveling Matzek, Arkashka the Cossack, Joseph's mother, the saintly yet practical Sarah, and his father, Benjamin, who made a fortune in America and lost it again in Europe.

The boy came to realize his own Jewishness when Russian persecution forced the Jews to make the synagogue the center of their world. He was driven by brutality, hunger, and ostracism to transform himself in spirit into the imaginary Chantille Jeantaigne Delacroix, scourge of evil, avenger of his people, Conqueror of Death. Joseph's accounts of daily life under unbelievably hard circumstances range from down-to-earth facts to soaring flights of fantasy and his desperate acting in order to stay alive brought him his true vocation, first on the scrounging amateur stage and then in the professional theatre.