Dead Man Walking: The Eyewitness Account of the Death Penalty That Sparked a National Debate (Paperback) 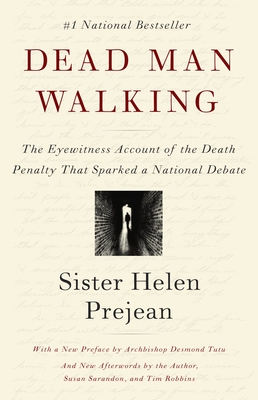 In 1982, Sister Helen Prejean became the spiritual advisor to Patrick Sonnier, the convicted killer of two teenagers who was sentenced to die in the electric chair of Louisiana’s Angola State Prison. In the months before Sonnier’s death, the Roman Catholic nun came to know a man who was as terrified as he had once been terrifying. She also came to know the families of the victims and the men whose job it was to execute—men who often harbored doubts about the rightness of what they were doing.

Out of that dreadful intimacy comes a profoundly moving spiritual journey through our system of capital punishment. Here Sister Helen confronts both the plight of the condemned and the rage of the bereaved, the fears of a society shattered by violence and the Christian imperative of love. On its original publication in 1993, Dead Man Walking emerged as an unprecedented look at the human consequences of the death penalty. Now, some two decades later, this story—which has inspired a film, a stage play, an opera and a musical album—is more gut-wrenching than ever, stirring deep and life-changing reflection in all who encounter it.

Helen Prejean, C. S. J., is a writer, lecturer, and community organizer who was born in Baton Rouge and has lived and worked in Louisiana all her life. Her groundbreaking firsthand account of the death penalty, Dead Man Walking, has been adapted into a movie, an opera, and a play for high schools and colleges. She is also the author of The Death of Innocents: An Eyewitness Account of Wrongful Executions. She has lectured extensively on the subject of capital punishment and has appeared on 60 Minutes, NBC’s Today Show, NPR’s Weekend Edition and Fresh Air, PBS’s Frontline, BBC World Service radio, and an NBC special series on the death penalty. She has received honorary degrees from colleges and universities across the United States. She is a member of the Congregation of St. Joseph.

“Deeply moving . . . Sister Prejean is an excellent writer, direct and honest and unsentimental. . . . She almost palpably extends a hand to her readers.” —The New York Times Book Review

“Here is one voice for life. We really should need no other.” —The New York Review of Books

"An intimate meditation on crime and punishment, life and death, justice and mercy and—above all—Christian love in its most all-embracing sense. . . . [Prejean] never shrinks from the horror of what she has seen. She never resorts to something so predictable as pathos or a play for sympathy." —Los Angeles Times

"A remarkable writer . . . Prejean's manner of describing the tortured relations among prisoners, criminal-justice officers and victims' families would be the envy of many novelists. Even if your own views on capital punishment are set in concrete, you are sure to be moved by the force of Prejean's personality and commitment." —Glamour

"Providing a gritty look at what really happens in the final hours of a death row inmate . . . Prejean takes readers to a place most will thankfully never know . . . adeptly probing the morality of a judicial system and a country that kills its citizens." —San Francisco Chronicle

"This arresting account should do for the debate over capital punishment what the film footage from Selma and Birmingham accomplished for the civil rights movement: turn abstractions into flesh and blood. Tough, fair, bravely alive—you will not come away from this book unshaken."
—BillMcKibben