The Life of Our Lord: Written for His Children During the Years 1846 to 1849 (Hardcover) 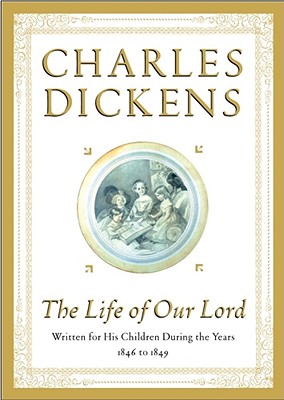 The Life of Our Lord: Written for His Children During the Years 1846 to 1849 (Hardcover)


Usually ships to store in 2-3 Days
Charles Dickens's other Christmas classic, with a new introduction by Dickens's great-great-grandson, Gerald Charles Dickens.
Charles Dickens wrote The Life of Our Lord during the years 1846-1849, just about the time he was completing David Copperfield. In this charming, simple retelling of the life of Jesus Christ, adapted from the Gospel of St. Luke, Dickens hoped to teach his young children about religion and faith. Since he wrote it exclusively for his children, Dickens refused to allow publication.
For eighty-five years the manuscript was guarded as a precious family secret, and it was handed down from one relative to the next. When Dickens died in 1870, it was left to his sister-in-law, Georgina Hogarth. From there it fell to Dickens's son, Sir Henry Fielding Dickens, with the admonition that it should not be published while any child of Dickens lived.
Just before the 1933 holidays, Sir Henry, then the only living child of Dickens, died, leaving his father's manuscript to his wife and children. He also bequeathed to them the right to make the decision to publish The Life of Our Lord. By majority vote, Sir Henry's widow and children decided to publish the book in London. In 1934, Simon & Schuster published the first American edition, which became one of the year's biggest bestsellers.
Charles Dickens was born in 1812 near Portsmouth where his father was a clerk in the navy pay office. The family moved to London in 1823, but their fortunes were severely impaired. Dickens was sent to work in a blacking-warehouse when his father was imprisoned for debt. Both experiences deeply affected the future novelist. In 1833, he began contributing stories to newspapers and magazines, and in 1836 started the serial publication of The Pickwick Papers. Thereafter, Dickens published his major novels over the course of the next twenty years, from Nicholas Nickleby to Little Dorrit. He also edited the journals Household Words and All the Year Round. Dickens died in June 1870.
Reverend Frederick Buechner author of On the Road with the Archangel and Listening to Your Life Perhaps the most touching aspect of Charles Dickens's The Life of Our Lord is how in it he sets all his literary powers aside and tells the Gospel story in the simple, artless language of any father telling it to his children. It is not surprising, remembering his own troubled childhood as he was surely remembering it himself, that he sums up the Christian message by saying that it is to do good even to those who do evil to us and to be always gentle, merciful, and forgiving.