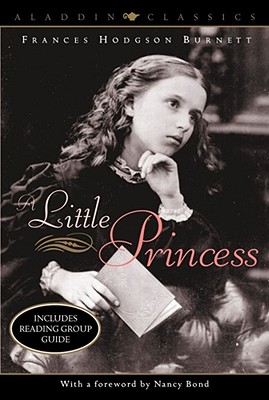 Written by British-born author Frances Hodgson Burnett and first published in 1905, A Little Princess tells the story of young Sara Crewe, privileged daughter of a wealthy diamond merchant. All the other girls at Miss Minchin's school treat Sara as if she truly were a princess. But when Captain Crewe's fortune is sadly lost, Sara's luck changes. Suddenly she is treated no better than a scullery maid. Her own fierce determination to maintain her dignity and remain a princess inside has intrigued and delighted readers for almost a hundred years, even inspiring a recent popular feature film.

Frances Hodgson Burnett (1849–1924) was born in Manchester, England, but moved to America as a teenager. Little Lord Fauntleroy was published in 1886 and was dramatized during Burnett's lifetime. The story lives on today in videos and movies. Though she began writing novels for adults, she gained lasting success writing for children. She is best known for Little Lord Fauntleroy, A Little Princess (1905), and The Secret Garden (1911).

Nancy Bond is the author of a number of books for young readers, including The Voyage Begun, a Boston Globe-Horn Book Award Honor Book; A Place to Come Back To, an American Library Association Best Book for Young Adults and a Booklist Editor's Choice; and Truth to Tell. She wrote after attending library school in a Welsh town outside of Aberstwyth, the book's setting. She lives in Concord, Massachusetts.