Let's Talk About Your Handicap: How to improve your Handicap in the sport of Polo (Paperback) 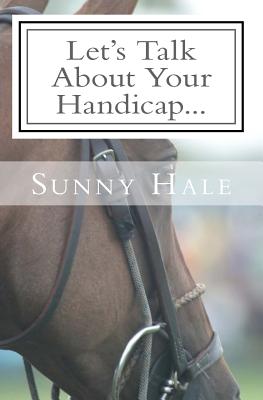 In this book, US Open Polo Champion and Polo Legend Sunny Hale provides a very straight forward and clear explanation of how to improve your Handicap in the sport of Polo.This book will give you expert advice and practical information that you can start applying today to improve your Polo. These are the actual personal concepts and techniques, that helped Sunny become a living legend in the sport of polo and attain the highest Handicap ever given to a woman in the history of Polo. She earned this Handicap while playing as a professional in High Goal Polo for some of the greatest players of all time, such as the Legendary Carlos Gracida, Memo Gracida and the world's #1 player Adolfo Cambiaso among others. Finally, someone wrote it down.Let's Talk About Your Handicap is volume #2 in the Let's Talk Polo book series, by Sunny Hale. For more about author Sunny Hale go to: www.sunnyhalepolo.com.

The New York Times called Sunny "the most famous female polo player in the world." ESPNW compares her accomplishments as "Some say she's pulled off the equivalent of being the first woman to earn a World Series ring." Sunny Hale is widely recognized as the most accomplished and well respected female Polo player in the world. What sets her apart from the pack, is her achievements at the top of what has traditionally been a male dominated sport, and the fact that she was hired as professional player to compete on teams alongside some of the greatest male players in the sport for over 20 seasons. Her most famous victory in Polo is the day she became the first woman in history to win the US Open Polo Championships as a professional player, hired by the Outback Steakhouse Polo Team at the request of the world's Number One Player of all time Adolfo Cambiaso. This would be the equivalent of a woman being hired to play in the NBA, World Series or the Superbowl as a starter among the men and winning the championships. She has been featured in media and magazines all over the world including ESPNW, Sports Illustrated and the New York Times for her achievements and true character of a Champion. Sunny is a published author of 4 books and a professional speaker, inspiring others to follow their dreams no matter how impossible the many seem.To learn more about Sunny go to: www.sunnyhalepolo.com