A World of My Own: The First Ever Non-stop Solo Round the World Voyage (Paperback) 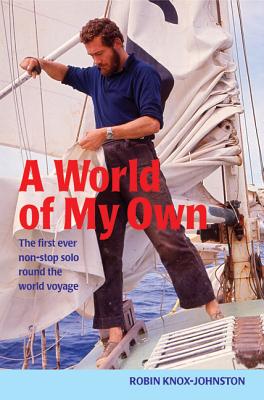 By Robin Knox-Johnston
Email or call for price.
Out of Print

Robin Knox-Johnston was the first person to make a non-stop single-handed sailing journey around the world. This is his uninhibited account of one of the greatest sea adventures of our time.

On Friday June 14, 1968, Suhaili, a tiny ketch, slipped almost unnoticed out of Falmouth Harbor steered by the solitary figure at her helm, Robin Knox-Johnston. Ten and a half months later Suhaili, paintwork peeling and rust streaked, her once white sails weathered and brown, her self-steering gone, her tiller arm jury rigged to the rudder head, came romping joyously back to Falmouth to a fantastic reception for Robin, who had become the first man to sail round the world non-stop single-handed.

By every standard it was an incredible adventure, perhaps the last great uncomputerized journey left to man. Every hazard, every temptation to abandon the astounding voyage came Robin's way, from polluted water tanks, smashed cabin top and collapsed boom to lost self-steering gear and sheered off tiller, and all before the tiny ketch had fought her way to Cape Horn, the point of no return, the fearsome test of any seaman's nerve and determination.

A World of My Own is Robin's gripping, uninhibited, moving account of one of the greatest sea adventures of our time. An instant bestseller, it is now reissued for a new generation of readers to be enthralled and inspired.

Robin Knox-Johnston entered the Merchant Navy at the age of 17,
obtaining his Master's Certificate 8 years later. Of the 9 competitors
he was the only one to complete the Sunday Times Golden Globe Race in
1968 after 312 days alone at sea and win the trophy for the first solo
non-stop circumnavigation. Since then Robin has participated in many
ocean races including the Whitbread, and in 1994 co-skippered Enza with
Sir Peter Blake to set a new world record for a circumnavigation. He
has been UK Yachtsman of the Year twice, International Yachtsman of the
Year in 1995, and was knighted in 1995. He still owns and sails Suhaili.

“A gripping tale of human achievement, 'A World of My Own' also provides an honest, personal insight...” —Devon Life

“A very readable story of adventure.” —The Little Ship