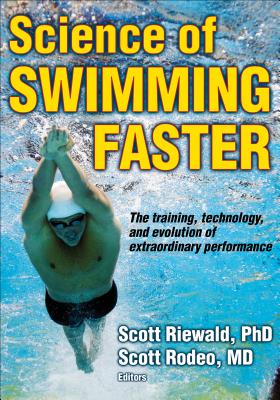 In a sport where victory is often determined by a fraction of a second, it’s obvious why one of the most sought-after secrets is how to swim faster. However, as the world’s most renowned coaches, athletes, trainers, and researchers know, there is no secret—just science.

Science of Swimming Faster is a remarkable achievement—one that embraces, explains, and applies the latest science and research that has and continues to set new performance benchmarks in the sport. It is a one-of-a-kind resource:

• The most credible and widely used training principles and programs

• An insider’s access to the strategies for training, tapering, fueling, recovery, and mental preparation being used with some of the world’s most successful swimmers.

With editors Scott Riewald and Scott Rodeo and a who’s-who list of international experts on the sport, Science of Swimming Faster offers you an unprecedented wealth of advanced yet accessible information on excelling in the sport.

Scott Riewald, PhD, is the U.S. Olympic Committee’s winter sport high-performance director. He works closely with eight winter sport national governing bodies to coordinate sport science and medical services for their athletes. He has served as the biomechanics director for USA Swimming at the U.S. Olympic Training Center in Colorado Springs. In this role, he was part of an international biomechanics research team at the Sydney 2000 Olympic Games and provided education and services to many of the nation's top swimmers. He has given presentations to athletes and coaches about using science to positively affect performance. Riewald has also been involved in cutting-edge research in evaluating new technologies and swim performance, and he has worked as the biomechanics director for the United States Tennis Association in Key Biscayne, Florida.

As an undergraduate at Boston University, Riewald was a competitive swimmer and still holds several school and conference records. He was named a GTE Academic All-American his senior year and was later inducted into BU's Athletic Hall of Fame. After earning an undergraduate degree in biomedical engineering, he competed in triathlons and coached a masters swimming team. He earned his MS and PhD in biomedical engineering from Northwestern University. Riewald is a certified strength and conditioning specialist (CSCS) and a certified personal trainer. He is coauthor of Complete Conditioning for Swimming (Human Kinetics, 2008).

Riewald and his wife, Suzie, live in Colorado Springs, Colorado, with their two children, Maddox and Callie.

Scott Rodeo, MD, is a clinician-scientist at the Hospital for Special Surgery in New York City, where he also serves as co-chief of the Sports Medicine and Shoulder Service. His specialty includes treating sport injuries to the knee, shoulder, ankle, and elbow. He also is a professor of orthopedic surgery at Weill Cornell Medical College. Rodeo holds a board position at Asphalt Green in Manhattan, where he helps promote injury prevention and healthy living through exercise. He served as team physician for the 2004, 2008, and 2012 U.S. Olympic swimming teams and the New York Giants football team. He has been involved with USA Swimming, serving as a chair of their Sports Medicine and Science Committee. Rodeo is also a former competitive swimmer and provides medical support for local swimming programs.