The Titan's Curse: Percy Jackson and the Olympians: Book 3 (CD-Audio) 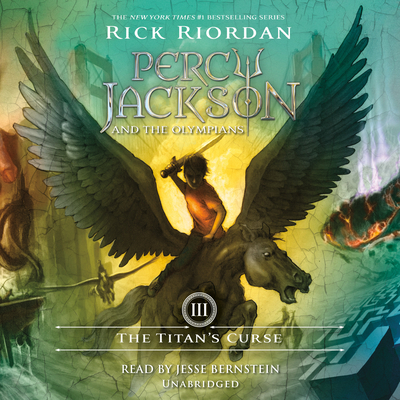 When Percy Jackson receives an urgent distress call from his friend Grover, he immediately prepares for battle. He knows he’ll need his powerful demigod allies, Annabeth and Thalia, at his side; his trusty bronze sword, Riptide; and . . . a ride from his mom.
The demigods race to the rescue, to find that Grover has made an important
discovery: two new powerful half-bloods whose parentage is unknown. But that’s not all that awaits them. The Titan lord, Kronos, has set up his most devious trap yet, and the young heroes have just fallen prey. Hilarious and action-packed, this third adventure in the series finds Percy faced with his most dangerous challenge so far: the chilling prophecy of the Titan’s curse.

Rick Riordan is the author of Percy Jackson and the Olympians, Book One: The Lightning Thief, and Percy Jackson and the Olympians, Book Two: The Sea of Monsters, both available on audio from Listening Library. His previous novels for adults include the hugely popular Tres Navarre series, winner of the top three awards in the mystery genre. He lives in San Antonio, Texas, with his wife and two sons.