The Music of Your Life: Stories (Paperback) 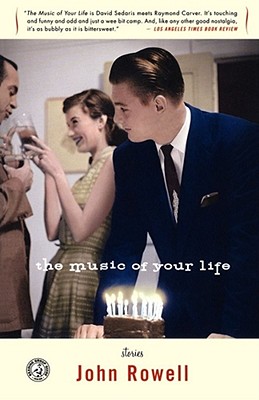 The Music of Your Life: Stories (Paperback)


Usually ships to store in 2-3 Days
With a voice that is both sophisticated and deeply Southern, author John Rowell evokes the memory of the great Truman Capote in this wonderful collection of short stories, peopled with unforgettable, endearing characters and filled with wry insights.

Drawn from the emotional well of a young man who grew up in love with the glittery, glamorous world of music and movies and theater—far removed from his own more prosaic life in North Carolina—and informed with honesty and compassion, the seven short stories that comprise The Music of Your Life showcase the talent of a remarkably gifted writer.

Compulsively readable and always accessible, each story takes the reader into the mind and heart of its central character, whether a young boy suffering from Lawrence Welk damage and teetering precariously on the edge of puberty ("The Music of Your Life") or a not-so-young-anymore man for whom fantasy and reality have become a terrifying blur and who finds himself slipping over the edge toward total meltdown ("Wildlife of Coastal Carolina").
Nostalgia plays a part in these stories as a somewhat jaded New York film critic looks back on his life and the movies that shaped him ("Spectators in Love"), and an aging flower-shop owner ruefully assesses the love he found and lost when, as an eighteen-year-old, he embarked on a Hollywood career that never soared but did include one particularly memorable appearance on the I Love Lucy television show ("Who Loves You?") These stories all create entire worlds within which the characters live and struggle to find their way.

Funny, touching, serious, and tender, the tales within The Music of Your Life are sure to appeal to anyone who has ever known the awkwardness of being "different," and while life is often harsh for the stories' characters, the bold determination with which they persevere offers inspiration to all.
John Rowell is a native of North Carolina, now living in New York City, where he conducts a seminar and writes theater criticism. His fiction, essays, and reviews have been featured in Tin House, Bloom, and Show Business Weekly, among others. He holds an MFA from the Writing Seminars at Bennington College in Vermont. He teaches English and Fiction Writing at The Gilman School of Baltimore, MD, where he also directs in the Upper School theater program.
Jill McCorkle The true brilliance of John Rowell's stories is that he holds the reader perfectly suspended between hysterical laughter and unshakeable heartbreak. His vision encompasses the quirky details of everyday life as well as the biggest, darkest, unanswerable questions. If Dorothy Parker and Truman Capote ever had a love child, his name would be John Rowell. The godparents might well be Oscar Wilde and Carson McCullers. The Music of Your Life bears the blessings of that literary parentage along with a contemporary spin that places Rowell in his own wonderful orbit. Long may he shine.

Stephen McCauley In the world of John Rowell's wonderful stories, movie soundtracks and Lawrence Welk's "champagne music" play in counterpoint of some of life's more difficult passages. Rowell's compassion, humor, and love of telling stories never falter, whether he's writing about schoolyard bullies, a very gay weekend in the country, or Lucille Ball.

Mark Childress John Rowell's debut in the world of fiction is completely remarkable. While the first thing you notice about these stories is their highly polished comic tone, it's the undertow of sweet sadness that lingers after you've read them.

Susan Cheever These are wonderful stories -- they go right to the heart of things. Vivid in detail, and rich with feeling, each story encompasses a whole world, complete with imperfections. A remarkable and impressive debut.

Lee Smith John Rowell wears his heart on his immaculate sleeve in this impressive collection. Stylish, smart, and frequently hilarious, these stories are deeply touching as well. I can't imagine a more auspicious debut.