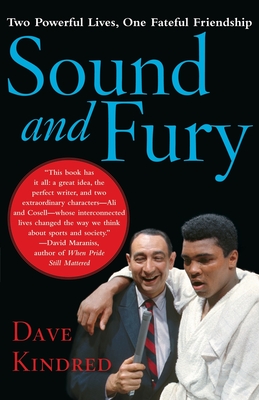 Muhammad Ali and Howard Cosell were must-see TV long before that phrase became ubiquitous. Individually interesting, together they were mesmerizing. They were profoundly different -- young and old, black and white, a Muslim and a Jew, Ali barely literate and Cosell an editor of his university's law review. Yet they had in common forces that made them unforgettable: Both were, above all, performers who covered up their deep personal insecurities by demanding -- loudly and often -- public acclaim. Theirs was an extraordinary alliance that produced drama, comedy, controversy, and a mutual respect that helped shape both men's lives.

Dave Kindred -- uniquely equipped to tell the Ali-Cosell story after a decades-long intimate working relationship with both men -- re-creates their unlikely connection in ways never before attempted. From their first meeting in 1962 through Ali's controversial conversion to Islam and refusal to be inducted into the U.S. Army (the right for him to do both was publicly defended by Cosell), Kindred explores both the heroics that created the men's upward trajectories and the demons that brought them to sadness in their later lives. Kindred draws on his experiences with Ali and Cosell, fresh reporting, and interviews with scores of key personalities -- including the families of both. In the process, Kindred breaks new ground in our understanding of these two unique men. The book presents Ali not as a mythological character but as a man in whole, and it shows Cosell not in caricature but in faithful scale. With vivid scenes, poignant dialogue, and new interpretations of historical events, this is a biography that is novelistically engrossing -- a richly evocative portrait of the friendship that shaped two giants and changed sports and television forever.

"This book has it all: a great idea, the perfect writer, and two extraordinary characters--Ali and Cosell--whose interconnected lives changed the way we think about sports and society." -- David Maraniss, author of When Pride Still Mattered

"The best books combine a compelling story, superb reporting, and wonderful writing. In Sound and Fury, Dave Kindred has produced all three elements. This is a book that needs to be read and reread to appreciate just how good it is." -- John Feinstein, author of Caddy for Life and Last Dance

"Cosell and Ali: it's impossible to think of one without the other. This dynamic look at two outsized personalities is as unique as was their relationship. Ali and Cosell created a form of synergy that transformed the world they dominated. But the triumph here is Kindred's. His prose floats like a butterfly. His reporting, telling it like it is, stings like a bee. Kindred by a knockout." -- Jane Leavy, author of Sandy Koufax: A Lefty's Legacy and Squeeze Play

"In this terrific book, Dave Kindred has not only invented a new form, he has set the platinum standard. Even things I thought I knew about Cosell and Ali are richer here. Sound and Fury is a shrewd, hilarious, and eventually heartbreaking journey into the nooks and crannies of their lives, surprising even for me, and I was there." -- Robert Lipsyte, author of The Contender and The Brave

"I love Muhammad Ali, and I absolutely love this book. It portrays Ali at his most glorious, most flawed, and most heroic. Dave Kindred's Sound and Fury will be the classic Ali biography for generations to come. Plus, there's Howard Cosell agitatin'. What could be more fun?" -- Michael Wilbon, cohost of ESPN's Pardon the Interruption

"As much a social history of our times as it is a biography of two of our most formidable cultural giants, Sound and Fury emerges clearly as a read quite as important as it is poignant and riveting." -- Bill Nack, author of My Turf: Horses, Boxers, Blood Money, and the Sporting Life and longtime contributor to Sports Illustrated