The Prop: A Novel (Paperback) 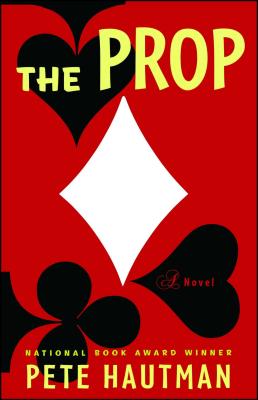 The Prop: A Novel (Paperback)


Usually ships to store in 2-3 Days
National Book Award winner Pete Hautman delivers a fast-paced mystery set in the torrid, unforgiving Southwestern desert, where the stakes are sky high and all bets are off.

Peeky Kane is a prop player at an Arizona casino owned by the Santa Cruz tribe. Her job is to play poker. She makes a handsome living off the suckers who populate the card room. Life is sweet.

But something's not right at Casino Santa Cruz. When Peeky inadvertently finds herself in a fixed game and comes away a couple thousand dollars richer, she finds herself drawn unwittingly toward the dark side of professional poker. Peeky has always thought of herself as a straight shooter, but now things aren't so clear. And they're about to get a lot murkier.

When a band of clown-masked robbers makes off with millions of the casino's dollars and leaves behind four corpses, Peeky recognizes one of the robbers as a casino employee, and fears that one of her closest loved ones might also be involved. That same day, Peeky's son-in-law turns up to tell her that Jaymie, her beloved daughter, has been stealing money from Peeky for years to feed a crack habit.

Numb from these revelations, Peeky is compelled to action by an unlikely source when the most powerful member of the Santa Cruz tribe calls upon her to help him save his troubled casino. Peeky must draw on her years of reading poker faces and playing the odds to save the casino, her daughter, and herself.
Pete Hautman is the author of National Book Award–winning novel Godless, Sweetblood, Hole in the Sky, Stone Cold, The Flinkwater Factor, The Forgetting Machine, and Mr. Was, which was nominated for an Edgar Award by the Mystery Writers of America, as well as several adult novels. He lives in Minnesota and Wisconsin. Visit him at PeteHautman.com.

"With The Prop, Pete Hautman has fashioned a kick-ass, corkscrew crime thriller that's as addictive as the dizzying, go-for-broke gambling milieu it portrays. The heroine, Peeky Kane, is tough, engaging, and wonderfully flawed, and I hope to see a lot more of her in the years to come." -- Dennis Lehane, author of Mystic River