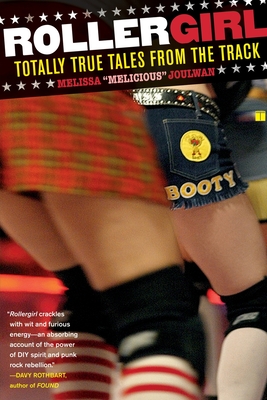 The 1950s phenomenon of Roller Derby is back in full force, and it's definitely not your grandma's game anymore. With leagues in more than one hundred cities across the country, a national tournament, and major sponsors, the new wave of the sport has gone mainstream. No one is better qualified to tell the story of Flat Track Derby's astronomic rise than Melissa "Melicious" Joulwan. As a founding member of the Texas Rollergirls -- the league that launched the sport and the reigning national champions -- she has helped redefine what it means to be stylish, sporty, and sexy.

With her mouthy, tough-as-nails style, Melicious recounts her best tales from the track: her fierce rivalries with The Wrench and Ivanna S. Pankin, the scene at the annual national tournament, the thrill of a bout, and the infractions that so often bring her to the penalty box. From the minute she first laced up her skates and wrapped herself in her alter ego, Roller Derby has given her a confidence boost, and she shares the positive impact the sport has also had on girls -- young and not-so-young -- who tack posters of her on their bedroom walls and lace up their own skates.

Complete with photos and suggestions on how to develop a Rollergirl name and persona, this unprecedented tell-all comes from the woman who's watched the sport evolve from an underground Friday-night event to a bona fide national phenomenon.

Melissa Joulwan, aka Melicious, #11 on the Hotrod Honeys, is a founding member of the Texas Rollergirls Rock-n-Rollerderby league. The original Miss Texas Rollergirl, Melicious was also voted Fan Favorite in 2005 and was ranked number one for on-track assists. She is a freelance writer and lives with her husband in Austin, Texas. Visit her online at www.rollergirlthebook.com.

"Rollergirl crackles with wit and furious energy -- an absorbing account of the power of DIY spirit and punk rock rebellion."
-- Davy Rothbart, author of Found

"... surprisingly inspirational story of four teams... who started a league of their own and survived to tell the tales." -- Mike Shea, Texas Monthly