Alexander: Child of a Dream (Paperback) 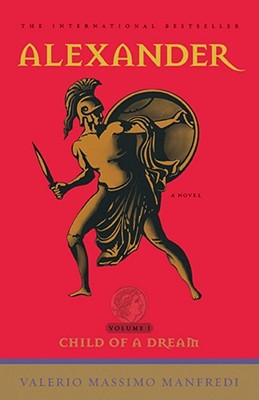 Alexander: Child of a Dream (Paperback)

This is book number 1 in the Alexander series.

Before his birth, omens foretold that Alexander, son of the warrior-king Philip of Macedonia, was destined for greatness. From boyhood, the prince was trained by the finest scholars and mightiest soldiers to attain extraordinary strength of body and spirit. A descendant of Heracles and Achilles, Alexander aimed to surpass his ancestors' heroism and honor, and his chosen companions strove to be worthy to share his godlike fate.
Even as a youth, Alexander's deeds were unequaled. In a single day, he tamed the fierce steed Bucephalus. In his first battle, his troops defeated the invincible Sacred Band. And as he grew to manhood, surrounded by deadly plots and intrigue, his friends pledged to follow him to the ends of the world. With the support of that loyal group of men, Alexander's might would transform dreams of conquest into reality amid the fabled cities of Persia and the mysterious East...and his destiny would carry them all to glory.
Dr. Valerio Massimo Manfredi is an Italian historian, archaeologist, and journalist. The professor of archaeology in the "Luigi Bocconi" University in Milan and a familiar face on European television, he has published a number of scientific articles and essays as well as thirteen novels, including the Alexander trilogy and The Last Legion. Alexander was published in thirty-six languages in fifty-five countries and was sold for a major film production in the U.S., and The Last Legion is soon to be a major motion picture starring Colin Firth and Ben Kingsley. Dr. Manfredi is married with two children and lives in a small town near Bologna.