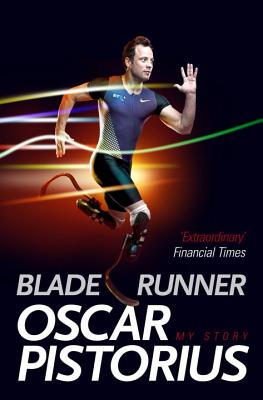 Oscar Pistorius's inspirational memoir tells of an incredible, emotional journey from disabled toddler to international sports phenomenon. At 11 months old, Oscar Pistorius had both his legs amputated below the knee. His mother wrote a letter to be read by Oscar when he was grown up: "A loser is not one who runs last in the race. It is the one who sits and watches, and has never tried to run." On discovering that their son had been born with no fibulae, Oscar's parents made the difficult decision to have both his legs amputated, giving him the best possible chance of a normal life. Oscar received his first pair of prosthetic legs at just 17 months, made specifically for him. From then on he became invincible: running, climbing, and, with the encouragement of his older brother, getting into any mischief he could. Throughout the course of his life Oscar has battled to overcome extraordinary difficulties to prove that, with the right attitude, anything is possible. Now a world-renowned athlete holding two Paralympic world records for the 100m and 200m, Oscar faces his ultimate fight--to fulfill the dream of competing at the 2012 Olympics. Blade Runner charts the extraordinary development of one of the most gifted sportsmen and inspirational figures on the planet, from immobilized child to world-class sprinter. This new edition is fully revised and updated and contains exclusive new chapters and pictures, as well as sporting a brand new cover design. If he qualifies to compete in the Olympics, he WILL make history and the coverage of his achievement will be extensive. Oscar Pistorius is "the titan of the track" (the Star) having won three gold medals at the Paralympics in Beijing for the 100m, 200m, and 400m.

Oscar Pistorius was born in 1986 in Johannesburg, South Africa. Known as the "Blade Runner" and "the fastest man on no legs," he is the double-amputee world-record holder in the 100m, 200m, and 400m events, and runs with the aid of Cheetah Flex-Foot carbon fiber transtibial artificial limbs.