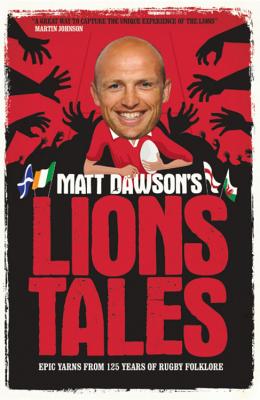 Matt Dawson's Lions Tales gives rugby fans a satisfying dose of wonderful Lions anecdotes, epic stories of triumph and despair, of camaraderie and controversy, and stirring examples of that special bond that only competing in the white heat of battle, halfway round the world, against the mighty All Blacks, Wallabies and Springboks, can engender.

Lions Tales is peppered with insight and laugh-out-loud moments, dredged from the memory banks of Dawson's own time in the iconic red shirt, and also from his keen interest in the Lions' remarkable 125-year traditions.

Matt Dawson won 77 caps and scored 101 points for England, and won 7 caps and scored 10 points for the British and Irish Lions, in a distinguished 15-year playing career, the pinnacle of which was winning the World Cup in 2003. At club level, he excelled at scrum-half for 13 years with Northampton and won the Heineken Cup in 2000, then finished his career at London Wasps where he won the Premiership in his first season.


Dawson is now a much-loved broadcaster who captains a team on BBC1's long-running A Question of Sport and passionately presents and commentates on rugby on BT Sport and BBC Radio 5 Live. In 2006 he won BBC1's Celebrity Masterchef and finished second in BBC1's Strictly Come Dancing.