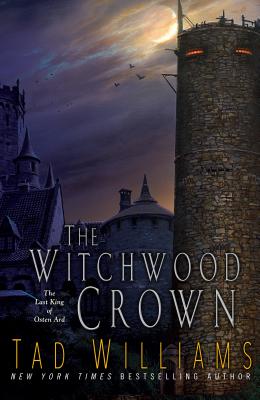 This is book number 1 in the Last King of Osten Ard series.

The Dragonbone Chair, the first volume of Memory, Sorrow, and Thorn, was published in hardcover in October, 1988, launching the series that was to become one of the seminal works of modern epic fantasy. Many of today’s top-selling fantasy authors, from Patrick Rothfuss to George R. R. Martin to Christopher Paolini credit Tad with being the inspiration for their own series.

Now, twenty-four years after the conclusion of Memory, Sorrow, and Thorn, Tad returns to his beloved universe and characters with The Witchwood Crown, the first novel in the long-awaited sequel trilogy, The Last King of Osten Ard.

More than thirty years have passed since the events of the earlier novels, and the world has reached a critical turning point once again. The realm is threatened by divisive forces, even as old allies are lost, and others are lured down darker paths. Perhaps most terrifying of all, the Norns—the long-vanquished elvish foe—are stirring once again, preparing to reclaim the mortal-ruled lands that once were theirs....
Tad Williams has held more jobs than any sane person should admit to—singing in a band, selling shoes, managing a financial institution, throwing newspapers, and designing military manuals, to name just a few. He also hosted a syndicated radio show for ten years, worked in theater and television production, taught both grade-school and college classes, and worked in multimedia for a major computer firm. He is cofounder of an interactive television company, and is currently writing comic books and film and television scripts as well. Tad and his family live in London and the San Francisco Bay Area. You can find Tad Williams at tadwilliams.com.
“Inspired me to write my own seven-book trilogy.... It’s one of my favorite fantasy series.” —George R. R. Martin, New York Times-bestselling author of A Song of Ice and Fire

“Groundbreaking.... Changed how people thought of the genre, and paved the way for so much modern fantasy. Including mine.” —Patrick Rothfuss, New York Times-bestselling author of The Name of the Wind

"Tad Williams is a master storyteller, and the Osten Ard books are his masterpiece. Williams’ return to Osten Ard is every bit as compelling, deep, and fully-rendered as the first trilogy, and he continues to write with the experience and polish of an author at the top of his game." —Brandon Sanderson, New York Times-bestselling author of Mistborn

“Memory, Sorrow, and Thorn is one of the great fantasy epics of all time.”
—Christopher Paolini, New York Times bestselling author of Eragon

"Building upon the revered history of Memory, Sorrow, and Thorn, Williams has outdone himself by penning a 700-plus page novel that is virtually un-put-down-able.... Williams’ grand-scale storytelling mastery is on full display here. Not just utterly readable—an instant fantasy classic." —Kirkus Reviews (starred)

“Readers who delight in losing themselves in long complex tales of epic fantasy will be in their element here, and there is the promise of much more to come in future volumes.” —Locus

“Highly Recommended. [Williams] draws on many mythologies for the background of his fantasy epic...story spiced with political intrigue and strong appealing heroes.” —Library Journal

“A grand fantasy on a scale approaching Tolkien's The Lord of the Rings.” —Cincinnati Post