Biography of the Bike: The Ultimate History of Bike Design (Hardcover) 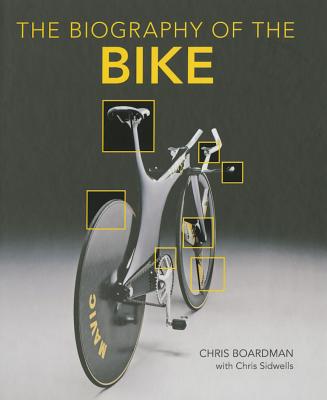 By Eddy Merckx (Foreword by), Chris Boardman, Chris Sidwells (By (photographer))
Email or call for price.
Hard to Find

From the velocipede era to today's high-tech bikes, dive into the history of the bicycle.

Former Olympic cycling gold medalist and world record holder Chris Boardman is among the most influential bicycle designers in the world. In Biography of the Bike, he examines the evolution of the modern bicycle from the invention of pedals to recent innovations in electronic gearing. The complete stories of each development (such as the modern derailleur) that have helped to move bike design forward, and how those inventions became established in the general marketplace, are laid out in all their fascinating detail. Complete with profiles of the riders and designers who have been at the forefront of bicycle design over the decades, the book also examines cultural trends, such as bicycle commuting and mountain biking, that have spurred advances in design.

Early efforts at aerodynamic design, the standardization of the "double-diamond" frame, and the introduction of disc wheels, allow you to see the entire history of your favorite two-wheeled transport. Heavily illustrated with photos of bikes, equipment close-ups, and historical action shots of famous cyclists such as Greg Lemond, Jan Ullrich, and Fausto Coppi make this a book that no biking enthusiast, gearhead, or racing fan will want to miss!

Chris Boardman is a leading bicycle designer and the Chairman and Design Director of Boardman Bikes, a subsidiary of Halfords. An Olympic gold medalist, he set three world cycling records and multiple British records and has worn the yellow three times in the Tour de France. A tireless bicycling advocate, he has been awarded an MBE for services to the sport. His nickname, "The Professor," comes from his technical know-how and meticulous attention to detail. Chris has been associated with cutting-edge design since riding his famously radical Lotus bicycle to a gold medal in the 1992 Olympics.

Chris Sidwells is a cycling journalist and the author of more than 20 books on the subject, including My Complete Bike Book (DK, 2003), which was translated into 24 languages, and the Bike Repair Manual (DK, 2004), now in its fifth edition. He is a regular columnist for Cycle Sport and Cycling Weekly, and also contributes to Bicycling, Men's Fitness, GQ, and other magazines.

Eddy Merckx, the Belgian former world champion, has been described by Velo as "the most accomplished rider that cycling has ever known," and by VeloNews as "the greatest cyclist of all time." Winner of three World Championships and five victories each in the Tour de France and the Giro d'Italia, Merckx today is the owner of Merckx Cycles, which specializes in the design and manufacture of top-end competition bikes.