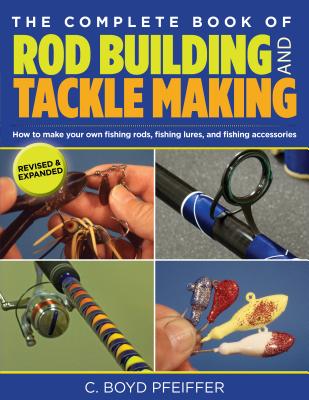 In its first edition, published in 1993, The Complete Book of Tackle Making became the reference of choice for builders of fine tackle and casual craftsmen alike. It saved countless anglers thousands of dollars, and now, with this new edition-revised, updated, and expanded to accommodate the many developments in tackle making methods, equipment, and materials made since then-it can continue to do so for years to come.Twenty-seven chapters and helpful appendixes include everything readers need to know about tools, spinners, bucktails, jigs, sinkers, plastic lures and plugs, wire leaders, painting and finishing methods, basic and advanced rod building, basic and decorative wraps, necessary knots and splices, tackle care and repair, suppliers and manufacturers, and much more. With more than eight hundred photographs and clear, step-by-step instruction throughout, this book is the ultimate reference for the tackle tinkerer.

C. Boyd Pfeiffer is an award-winning outdoor journalist widely known for his expertise in fresh and salt water fishing, tackle, fly tying, fly fishing and outdoor photography. He has fished extensively since a youth and contributed to the outdoor press for the past 40 years. In doing so, Pfeiffer has written thousands of articles and columns for over 70 magazines, served as outdoor editor of The Washington Post, lectured frequently, authored 23 books, contributed to additional books, scripted TV shows and segments, and served as a consultant to the fishing tackle industry. He also served as editor of the trade journal Fishing Tackle Trade News for five years. Pfeiffer has authored almost two dozen books on fishing and outdoor photography, with his most recently published works including the Our Fishing Heritage: Tackle & Equipment, Modern Tackle Craft, Bug Making, Fly Fishing Bass Basics, Fly Fishing Saltwater Basics, Shad Fishing, Tying Trout Flies, Tying Warmwater Flies and two fishing guides for a Field and Stream series of hunting and fishing books. Pfeiffer maintains active memberships in the Outdoor Writers Association of America (president, 1988-89), Pennsylvania Outdoor Writers Association (president, 1985-86), Mason-Dixon Outdoor Writers Association (president, 1994-96, 2004-2005), Southeastern Outdoor Press Association and Photographic Society of America (life member). From these and other organizations he has received dozens of awards for his outdoor writing and photography.He has also received the prestigious Ham Brown service award (1992) - the ultimate award given by the Outdoor Writers Association of America for "devoted past service to the organization over a period of continuous years." In 2000, Pfeiffer received a Distinguished Life Membership from the Mason-Dixon Outdoor Writers Association for a lifetime of service to the organization. In 2004, Pfeiffer received another top award from the Outdoor Writers Association of America - that of Excellence in Craft for his lifetime body of work. Additionally, in 2005 he was named as a "Legendary Communicator" by the National Fresh Water Fishing Hall of Fame.Pfeiffer is widely known for his knowledge of tackle and has served as a consultant to many fishing tackle companies. He is also in demand as a contract and product photographer for many associations and firms. Pfeifer also frequently lectures, gives seminars and slide shows to fishing clubs and sport shows. Pfeiffer has had columns in or served as contributing writer to a number of publications including Sports Afield, Outdoor Life, The Washington Times, Fishing Tackle Trade News, Bassmaster, Bassin', Pennsylvania Sportsman, Fishing Facts, American Angler (workbench columnist), Fly Tyer (columnist), Warmwater Fly Fishing (columnist), and others.Pfeiffer makes his home with his wife Brenda in Phoenix, Md., but has fished throughout the world, including much of the United States, and parts of Canada, Brazil, Australia, Panama, Belize, Venezuela, Columbia, Costa Rica, Mexico, Guatemala, and elsewhere.