Running with the Buffaloes: A Season Inside with Mark Wetmore, Adam Goucher, and the University of Colorado Men's Cross Country Team (Paperback) 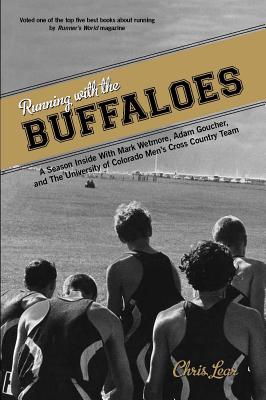 Top five Best Books About Running, Runner's World Magazine Top three Best Books About Running, readers of Runner's World Magazine (December 2009) In RUNNING WITH THE BUFFALOES, writer Chris Lear follows the University of Colorado cross-country team through an unforgettable NCAA season. Allowed unparalleled access to team practices, private moments, and the mind of Mark Wetmore--one of the country's most renowned and controversial coaches--Lear provides a riveting look inside the triumphs and heartaches of a perennial national contender and the men who will stop at nothing to achieve excellence. The Buffaloes' 1998 season held great promise, with Olympic hopeful Adam Goucher poised for his first-ever NCAA cross-country title, and the University of Colorado shooting for its first-ever national team title. But in the rigorous world of top-level collegiate sports, blind misfortune can sabotage the dreams of individuals and teams alike. In a season plagued by injury and the tragic loss of a teammate, the Buffaloes were tested as never before. What these men managed to achieve in the face of such adversity is the stuff of legend and glory.With passion and suspense, Lear captures the lives of these young men and offers a glimpse of what drives a gifted runner like Adam Goucher and a great coach like Mark Wetmore. Like Lance Armstrong's It's Not About the Bike, RUNNING WITH THE BUFFALOES is at once a glowing celebration of a sport and an inspiration to anyone who has ever had the courage to beat the odds and follow a dream.

CHRIS LEAR attended the Pingry School in Martinsville, New Jersey. A gifted runner, he capped his senior season with a 4:09 mile at the Golden West Invitational. The time made him New Jersey's fastest high-school miler of the 1990s. He graduated from Princeton University in 1996, where he earned All-Ivy, All-East, and All-America honors, and was a two-time cross-country captain. He lives in Boulder, Colorado.

Lear's tale of the 1998 Colorado cross country season is part tragedy, part biography and part training window to one of the country's best programs. It deserves its cult-classic status and is worthy of another read every few years.”  --Running Times