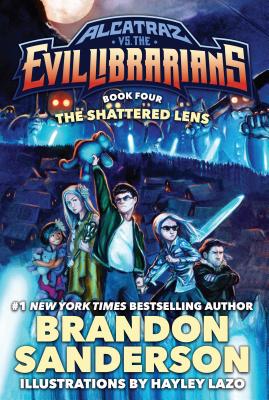 The Shattered Lens is the fourth action-packed fantasy adventure in the Alcatraz vs. the Evil Librarians series for young readers by the #1 New York Times bestselling author Brandon Sanderson. These fast-paced and funny novels are now available in deluxe hardcover editions illustrated by Hayley Lazo.

“An excellent choice to read aloud to the whole family. It's funny, exciting, and briskly paced.” —Nancy Pearl on NPR'S Morning Edition

Brandon Sanderson grew up in Lincoln, Nebraska. He lives in Utah with his wife and children and teaches creative writing at Brigham Young University. He is the author of such bestsellers as the Mistborn® trilogy and its sequels, The Alloy of Law, Shadows of Self, and The Bands of Mourning; the Stormlight Archive novels The Way of Kings and Words of Radiance; and other novels, including The Rithmatist and Steelheart. In 2013, he won a Hugo Award for Best Novella for The Emperor's Soul, set in the world of his acclaimed first novel, Elantris. Additionally, he was chosen to complete Robert Jordan's Wheel of Time® sequence.
"Sanderson unexpectedly draws everything together in an extravagantly silly climax. Readers whose sense of humor runs toward the subversive will be instantly captivated. Like Lemony Snicket and superhero comics rolled into one (and then revved up on steroids), this nutty novel... [is] also sure to win passionate fans." - Publishers Weekly, starred review