Reach for the Summit: The Definite Dozen System for Succeeding at Whatever You Do (Paperback) 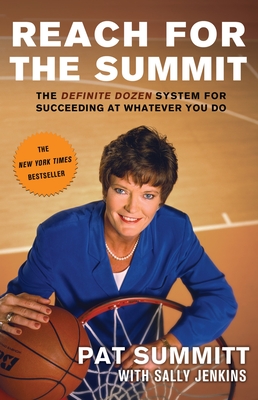 Pat Summitt, head coach of the Tennessee Lady Vols, was a phenomenon in women's basketball.  Her ferociously competitive teams won three NCAA championships in a row--1996, 1997, and 1998.  The 1997-98 Lady Vols posted a historic 39-0 record, prompting the New York Times, among many others, to proclaim them "the best women's college team ever." In this groundbreaking motivational book, Pat Summitt presented her formula for success, which she called the "Definite Dozen System." In each of the book's twelve chapters, Summitt talked about one of the system's principles--such as responsibility, discipline, and loyalty--and showed you apply it to your own situation.  Along the way, she used her own remarkable story as a vehicle for explaining how anyone can transform herself through ambition.  Pat Summitt's story will motivate you to achieve in sports, business, and the most important game of all--life.

Pat Summitt became head coach of women's basketball at Tennessee in 1974, and won more national championships than any coach since the legendary John Wooden.  She was a sought-after motivational speaker for such companies as Proctor & Gamble and Kodak.  She and her husband, R.B., lived in Knoxville with their son, Tyler.

Sally Jenkins is the author of Men Will Be Boys.  A veteran sports reporter whose work has been nominated for the Pulitzer Prize, she has worked for the Washington Post and Sports Illustrated and is now at Condé Nast Sports for Women.

"If you want to understand what makes a champion, in any field or on any level, read Pat Summitt's story."
--John Feinstein, author of A March to Madness

Pat Summitt is "a genius of a coach."
--New York Times

"[Pat Summitt is] one of the best coaches in basketball history--male, female, college or pro.  .  .  .  [She has] an extraordinary combination of grit and tenderness."
--USA Weekend

"If you want to learn about winning and the elements for success, Pat Summitt can provide all the data to tell you how to win at any level.  To put it in Vitalese, she is awesome, baby, with a capital A."
--Dick Vitale, ESPN sports commentator

"As a manager and master motivator, Pat Summitt transcends sports.  The most experienced CEO can learn from her contagious work ethic and ingenious methods."
--Ken Blanchard, coauthor of The One-Minute Manager