No Shortcuts to the Top: Climbing the World's 14 Highest Peaks (Paperback) 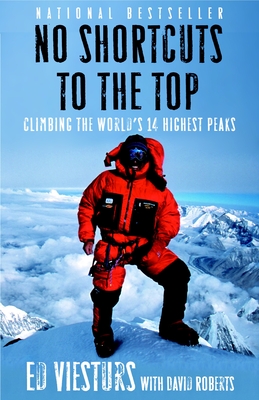 By Ed Viesturs, David Roberts
$17.00
On Our Shelves Now

This gripping and triumphant memoir from the author of The Mountain follows a living legend of extreme mountaineering as he makes his assault on history, one 8,000-meter summit at a time.

ED VIESTURS is the first and only American to ascend all fourteen of the world's 8,000-meter peaks without supplemental oxygen and the author of The Mountain, K2, and The Will to Climb.

In addition to his collaborations with Ed Viestrus, DAVID ROBERTS is the author of more than twenty books, including Finding Everett Ruess.

“Ed Viesturs is not merely one of our strongest mountaineers; he’s also one of the most remarkable. He’s demonstrated that it’s possible to climb the world’s highest peaks without taking reckless chances, and without sacrificing one’s honor or integrity. He has never hesitated to help other climbers in need, even when it meant putting himself in danger or sacrificing his own opportunity to achieve a summit. Ed, simply put, is a genuine American hero.” —Jon Krakauer

“From the drama of the peaks, to the struggle of making a living as a professional climber, to the basic how-tos of life at 26,000 feet, No Shortcuts to the Top is fascinating reading.” —Aron Ralston, author of Between a Rock and a Hard Place

“Ed Viesturs—the first American to climb all fourteen 8,000 meter peaks without bottled oxygen—is an animal. A human animal blessed with enormous strength balanced by intelligence, honesty, and a heart of gold. And besides, HE IS A NICE GUY. This is a great read for those of us who climb, those who want to learn to climb and live to tell about it, and those who like great adventures.” —Jim Whittaker, first American to climb Mount Everest