The Ayatollah Begs to Differ: The Paradox of Modern Iran (Paperback) 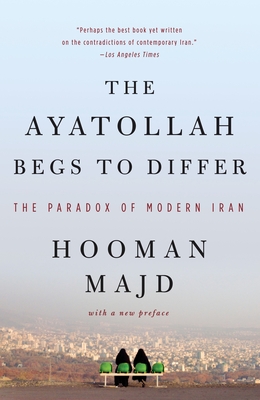 The Ayatollah Begs to Differ: The Paradox of Modern Iran (Paperback)

Including a new preface that discusses the Iranian mood during and after the June 2009 presidential election and subsequent protests, this is an intimate look at a paradoxical country from a uniquely qualified journalist.

The grandson of an eminent ayatollah and the son of an Iranian diplomat, Hooman Majd offers perspective on Iran's complex and misunderstood culture through an insightful tour of Iranian culture, introducing fascinating characters from all walks of life, including zealous government officials, tough female cab drivers, and open-minded, reformist ayatollahs. It's an Iran that will surprise readers and challenge Western stereotypes.

Born in Tehran, Iran, in 1957 but educated in the West, Hooman Majd is the author of The Ayatollah Begs to Differ (an Economist and Los Angeles Times Best Book of 2008) and The Ayatollahs' Democracy: An Iranian Challenge. He lives in New York City.

“Perhaps the best book yet written on the contradictions of contemporary Iran.... It captures like no book in recent memory the ethos of the country, in elegant and precise prose.” —Los Angeles Times

“Essential reading for anyone wanting to understand the paradox that is Iran (as well as America) in the post-Bush world.” —GQ

“In this delightful book, Hooman Majd, a gifted storyteller, takes us on a tour of his own private Persia, which is also the Iran of Mahmoud Ahmadinejad. The results are illuminating, humorous, sobering, and ultimately reassuring.”

—Jon Lee Anderson, author of The Fall of Baghdad

“Hooman Majd is a stylish and engaging guide through the by-ways of Iranian life. Leading us from seminary to opium den to the presidential compound, his wry sense of humor makes this book a pleasure to read.” —Gary Sick, Ph.D., senior research scholar at Columbia University and member of the National Security Council staff under presidents Ford, Carter, and Reagan

“A witty, timely perspective on the nation posing the greatest challenge to our next President. Travel writing often makes for easy reading at the expense of relevant information, which gets lost in the details. Not so with The Ayatollah Begs to Differ.”

—Bill White, mayor of Houston and U.S. secretary of energy under President Clinton