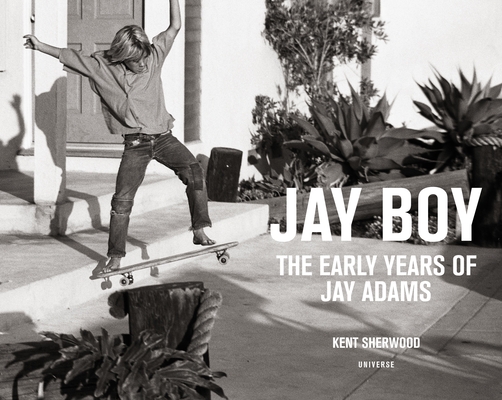 An endearing book of photographs of legendary skateboarding pioneer and Z-Boy Jay Adams during his childhood years, taken by Adams’s stepfather Kent Sherwood and now back in print for the first time since Adams’s passing.

Skateboarding legend Jay Adams’s sudden and unexpected death at the age of fifty-three shocked the world. Media outlets including the New York Times, the Washington Post, CNN, the Hollywood Reporter, ESPN, MTV, the Telegraph, and People magazine to name only a few, paid tribute to Jay Adams; the broad coverage he received speaks to the immense influence Adams had on the sport of skateboarding and the subsequent culture he helped grow and shape. Universe is pleased to bring back into print the little-known book of photographs of Jay Adams’s earliest days as a surfer and skateboarder, taken by his stepfather Kent Sherwood.

Sherwood is directly responsible for unleashing Adams’s talent on the world: he introduced Adams at a very young age to surfing and skateboarding. Sherwood, a self-taught photographer, began shooting the young Jay Adams at play, surfing, and skating with his friends, including Tony Alva, Wentzle Ruml, and Shogo Kubo, among others. Jay Boy is an endearing, intimate look at the gifted Adams and his friends, and includes sweet and revealing thoughts about his past, written in his own hand before he passed away. It is certain to appeal to any fan of skateboarding.

Jay Adams’s stepfather Kent Sherwood is an aerospace engineer and photographer and one of the founders of Z-Flex Skateboards. Legendary skateboarder Tony Alva is most prominently known as one of the original Z-Boys. C. R. Stecyk III is a multimedia artist and writer. He was a writer and production designer on the documentary film Dogtown and Z-Boys. Stecyk cofounded the Zephyr atelier. Glen E. Friedman is a celebrated skate, hip-hop, and punk photographer. He is the author of My Rules.

“'Jay Boy: The Early Years of Jay Adams' is an absolutely magnificent book and a must-have for everyone with an interest in skateboarding."
—Juice Magazine

"In this insightful collection, you see how a legend is formed, with captions penned by Adams himself while incarcerated, prior to his release, and unexpected passing. A must have in your collection, get your copy via RIZZOLIUSA March 2017"
—DeFy New York

"The book of Kent Sherwood's photos, Jay Boy: The Early Years Of Jay Adams feels like a family album you've been given a peek into. The photos are familiar in that there are probably similar photos of you in your family's album on a shelf somewhere. The photos are extraordinary because of their subjects, Jay Adams, Tony Alva, and various other Dogtown heavys before they became that."
—Mostly Skateboarding Blog

"The 'Jay Boy' book by Kent Sherwood makes me wish I was living in those times, being carefree and wild in the streets with all of Jay’s friends, like my dad, Shogo, skating and surfing in Venice and LA. Jay looks so happy and his captions are hilarious."
—Juice Magazine