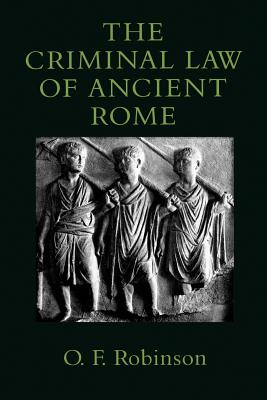 Although the Romans lived in a society very different from ours, they were like us in fearing crime and in hoping to control it by means of the law. Ordinary citizens wanted protection from muggers in the streets or thieves at the public baths. They demanded laws to punish officials who abused power or embezzled public monies. Even emperors, who feared plotters and wanted to repress subversive ideas and doctrines, looked to the law for protection.

In the first book in English to focus on the substantive criminal law of ancient Rome, O. F. Robinson offers a lively study of an essential aspect of Roman life and identity. Robinson begins with a discussion of the framework within which the law operated and the nature of criminal responsibility. She looks at the criminal law of Rome as it was established in the late Republic under Sulla's system of standing jury-courts. Grouping offenses functionally into five chapters, she examines crimes committed for gain, crimes involving violence, sexual offenses, offenses against the state, and offenses against the due ordering of society.

O. F. Robinson is a reader in law at the University of Glasgow. Her books include Ancient Rome: City Planning and Administration and European Legal History.