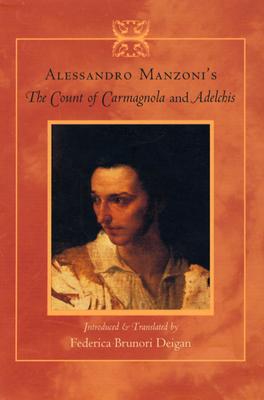 Winner of the Premio Flaiano per l'italianistica.

A leading figure in Italian Romanticism and the Risorgimento, Alessandro Manzoni (1785-1873) is best known for The Betrothed, a historical novel set in northern Italy in the early seventeenth century. Although the success of this monumental novel eclipsed his reputation as a playwright, Manzoni himself prominently placed his two verse tragedies, The Count of Carmagnola (1820) and Adelchis (1822), at the beginning of a volume of his complete works, emphasizing their personal significance in his oeuvre. Both dramas reflect Manzoni's lifelong passion for history and confirm Georg Luk cs's assessment of Manzoni as the most important exponent of historical drama at the time in Western Europe.

Adelchis, set at the end of the eighth century, describes the events that led to the fall of the Lombard Kingdom under the joint reign of Desiderius and his son Adelchis. The Count of Carmagnola chronicles the conflict between the title character, a fiery Renaissance general, and the Republic of Venice. In his enthusiastic review of The Count of Carmagnola, Goethe congratulated Manzoni for having abandoned the old rules and made such serious and firm progress on the new path that one can now form new rules on the model of this work.

Now, translator Federica Brunori Deigan presents lyrical English-language versions of these two tragedies which, taken together, dramatize the first two epochs in Manzoni's history of Italy. (The Betrothed completes the triptych, illustrating the period of Spanish domination.) Long unavailable in English, The Count of Carmagnola and Adelchis are distinguished by their dramatic power and thematic gravity. Manzoni considers the interactions of Christian morals and Machiavellian politics through deft psychological portraiture, ultimately revealing the course of history as a fabric woven by individuals free will according to a logical pattern of actions and reactions, within the vaster providential plan, that human eyes can only dimly perceive.

In her extensive introduction, Deigan describes Manzoni's life and times; places the two tragedies in the context of historical dramas by Goethe, Schiller, Byron, and Hugo; and highlights Manzoni's synthesis of diverse literary traditions: Shakespeare's tragedies and histories, German and French romanticism, and Dantean influences. Also included are a thorough bibliography of Manzonian scholarship, as well as Manzoni's original preface to Carmagnola and his historical notes to the tragedies, which provide additional insight into his complex thoughts on politics, history, and the dramatic arts.

Federica Brunori Deigan is a lecturer in Italian at the University of Maryland.