The City Game: Basketball from the Garden to the Playgrounds (Paperback) 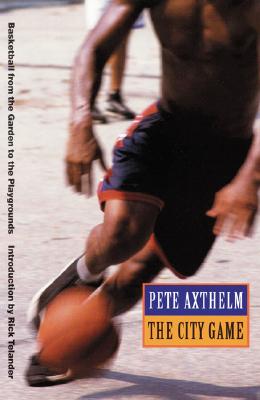 Pete Axthelm follows the 1969–70 season of the New York Knicks and provides a parallel focus on basketball as it was then played in the black neighborhoods of New York City. Throughout, he writes clearly, intelligently, and passionately about the game, bringing alive the players’ efforts, accomplishments, and failures.

Pete Axthelm was an editor for Newsweek. Rick Telander is a sports columnist for the Chicago Sun-Times and a writer for ESPN Magazine.

"The master prose stylist portrays parallel basketball worlds in New York City: Madison Square Garden, where the Knicks won the 1969-1970 championship, and the playgrounds of Harlem, where stars such as Earl (the Goat) Manigault burned brightly but too briefly."—Sports Illustrated

"The best description of basketball played in New York City streets during the sixties and seventies."—Bill Bradley, The New Yorker

"Superb . . . [Axthelm] combines Knick history, player backgrounds, seasonal anecdotes and court triumphs with another phenomenon—city basketball in the crowded ghettoes of the nation. The areas he focuses on primarily are the asphalt playgrounds of Harlem and Bedford Stuyvesant. There basketball has its special code of behavior, its pecking order and its own culture heroes. . . . A few city playground aces have made it to college . . . , and a few have found an escape route to the Harlem Globetrotters or the Eastern League. But many others have become strung out on poverty or drugs or have been imprisoned. . . . The book offers absorbing insights into the most unique and gripping of all city sports."—Rex Lardner, New York Times