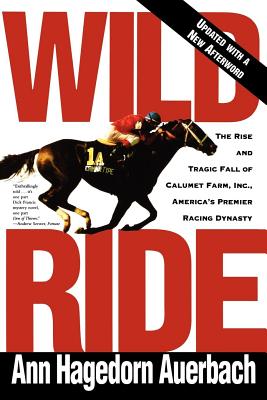 An award-winning writer chronicles the tragic story behind the downfall of horse racing's crown jewel.

Founded in 1924 by Chicago mogul William Monroe Wright, Calumet Farm was to the world of thoroughbred racing what the New York Yankees are to baseball -- a sports dynasty. The stable bred so many superstars that it became the standard by which all achievements were measured in the horse racing industry. But during the 1980s, a web of financial schemes left Calumet destitute.

Wild Ride is Ann Hagedorn Auerbach's investigation of the fast-track, multibillion-dollar thoroughbred industry and the fall of Calumet -- the inside story of a debacle that extended further than anyone could have imagined. Spanning four generations, this fast-paced saga brings to life a gallery of colorful characters from Calumet's glittery past. Wild Ride shows the industry's transformation from a clubby blue-blood society where a handshake closed a deal to a high-stakes business bulging with bankers and scandalous deal making. When the Bluegrass Bubble exploded, one of America's largest family fortunes lay in ruins.

"A fascinating tale with a cast of characters worthy of Dickens -- or Runyon." -- Carl Desens, Business Week

Ann Hagedorn Auerbach is a former Wall Street Journal reporter, and has also written for The San Jose Mercury News, The New York Daily News, and The Washington Post. She is the award-winning author of Wild Ride: The Rise and Tragic Fall of Calumet Farm, Inc., which was a regional bestseller and launched a government investigation. She lives New York City.