The Magic Journey: A Novel (The New Mexico Trilogy #2) (Paperback) 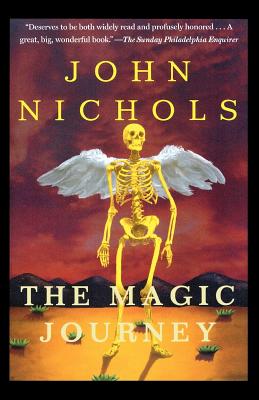 This is book number 2 in the The New Mexico Trilogy series.

Spanning forty years, The Magic Journey tells the tale of how relentless progress transformed a rural backwater into a boomtown.

Boom times came to the forgotten little southwestern town of Chamisaville just as the rest of America was in the Great Depression. They came when a rattletrap bus loaded with stolen dynamite blew sky-high, leaving behind a giant gushing hot spring. Within minutes, the town's wheeler-dealers had organized, and within a year, Chamisaville was flooded with tourists and pilgrims, and the wheeler-dealers were rich.

At first, it was a magic time for Chamisaville—almost as if every day were a holiday. But the euphoria gradually dissipated, and the land-hungry developers, speculators, and interlopers moved in. Finally, the day came when Chamisaville's people found themselves all but displaced, their children no longer heirs to their land or their tradition. With mounting intensity, The Magic Journey reaches a climax that is tragically foreordained.

A sensitive, vital, and honest chronicle of life in America's Southwest, it is also an incisive commentary on what America has become on its road to progress.

The Magic Journey is part of the New Mexico Trilogy, which includes The Milagro Beanfield War and The Nirvana Blues.

John Nichols's New Mexico Trilogy, inaugurated in 1974 with the publication of The Milagro Beanfield War, has grown from regional stature to national appeal, from literary radicals to cult classics. Beloved for his compassionate, richly comic vision and admired for his insight into the cancer that accompanies unbridled progress, Nichols is the author of novels and works of nonfiction. He lives in northern New Mexico.

“Deserves to be both widely read and profusely honored . . . A great, big, wonderful book.” —The Sunday Philadelphia Inquirer

“One of the most compelling novels I've read in a long time . . . As timeless as it is timely.” —Chicago Tribune Book World