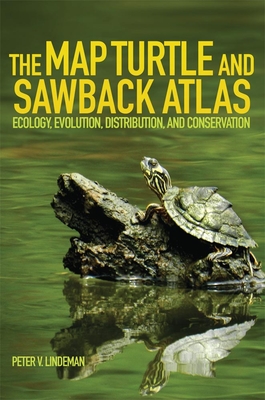 Covering all facets of the biology of a little-known genus, Peter V. Lindeman's lavishly illustrated Map Turtle and Sawback Atlas is both a scientific treatise and an engaging introduction to a striking group of turtles. Map turtles and sawbacks, found in and along rivers from Texas to Florida and north to the Great Lakes, fascinate ecologists and evolutionary biologists. Over a short geologic time span, these turtles achieved exceptional biological diversification. Their diets are also exceptionally diverse, and a significant difference in size distinguishes males from females. Adult males are typically half or less the shell length of adult females, making map turtles and sawbacks the champions of sexual dimorphism among not only turtles but all four-legged vertebrates. Aesthetics also draw biologists and hobbyists to map turtles and sawbacks. While the male Sabine map turtle may look to some like a "pencil-necked geek," as the author puts it, markings on the shell, limbs, head, and neck make map turtles among the most attractive turtles on earth. Sawbacks feature a striking ridge down their shell. Few turtles show themselves off to such advantage. Photographs included here of Graptemys basking poses reveal to what improbable heights these turtles can scale, the spread-eagle sunning stances they adopt, the stacking of individuals on a crowded site, and the heads that warily watch the world above the waterline. In lively prose, Lindeman details the habitat, diet, reproduction and life history, natural history, and population abundance of each species. A section on conservation status summarizes official state, federal, and international designations for each species, along with efforts toward population management and recovery as well as habitat preservation. The author also outlines promising avenues for future research, ranging from the effects of global climate change on populations to strategies for combating expansion of the pet trade.