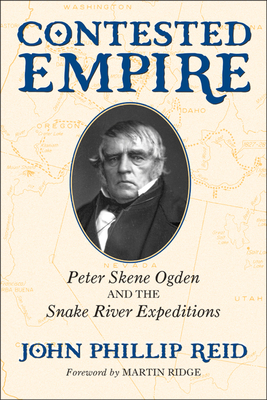 Do law and legal procedures exist only so long as there is an official authority to enforce them? Or do we have an unspoken sense of law and ethics?

To answer these questions, John Phillip Reid's Contested Empire explores the implicit notions of law shared by American and British fur traders in the Snake River country of Idaho and surrounding areas in the early nineteenth century. Both the United States and Great Britain had claimed this region, and passions were intense. Focusing mainly on Canadian explorer and trader Peter Skene Ogden, Reid finds that both side largely avoided violence and other difficulties because they held the same definitions of property, contract, conversion, and possession.

In 1824, the Hudson's Bay Company directed Ogden to decimate the furbearing animal population of the Snake River country, thus marking the region a "fur desert." With this mandate, Great Britain hoped to neutralize any interest American furtrappers could have in the area. Such a mandate set British and American fur men on a collision course, but Ogden and his American counterparts implicitly followed a kind of law and procedure and observed a mutual sense of property and rights even as the two sides vied for control of the fur trade.

Failing to take legal culture into consideration, some previous accounts have depicted these conflicts as mere episodes of lawless frontier violence. Reid expands our understanding of the West by considering the unspoken sense of law that existed, despite the lack of any formalized authorities, in what had otherwise been considered a "lawless" time.