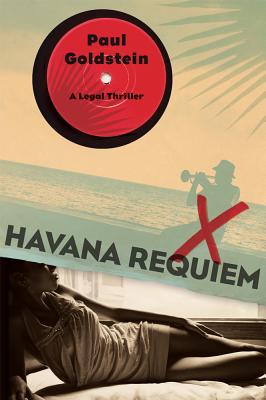 Fueled by alcohol and legal brilliance, Michael Seeley once oversaw his law firm's most successful litigation. Until it all fell apart. Recklessness and overreach cost him his wife, his job, and likely the life of his last client, a Chinese dissident journalist. "Havana Requiem," the latest Seeley novel from the acclaimed author Paul Goldstein, opens after a year's sobriety has earned Seeley back most of what he lost: the partnership in his Manhattan law firm, if not his corner office; the wary respect of most of his partners; the lucrative clients--but not the gin-sharpened passion.

Then the renowned Cuban musician Hector Reynoso enters his office with a simple request: help him and other composers who defined Cuba's musical golden age of the 1940s and '50s--the music that made the Buena Vista Social Club internationally famous--reclaim the copyright to their work. When Reynoso goes missing, Seeley's reluctant promise to help draws him progressively deeper into Havana's violent underbelly and a decades-long conspiracy that runs from the partners in his firm to the U.S. State Department to Cuba's security police, who are willing to do anything to suppress the truth. In the heat of Havana, Seeley will lose himself to his worst and best passions as his pursuit of justice becomes a desperate gambit to save not only his composers but the stunning Amaryll, who is playing her own dangerous game.

Paul Goldstein is regularly included in Best Lawyers in America and is the author of two previous Michael Seeley novels.


“I love this book. Fascinating, Byzantine, and completely unpredictable, Havana Requiem puts Paul Goldstein squarely in the first rank of not only legal thriller writers but all thriller writers. The portrait of post-Fidel Cuba and the sweltering inequities of Havana is unforgettable.”
—Timothy Hallinan, author of The Queen of Patpong

“A Patent Lie . . . trumps John Grisham’s work in every way—character, setting, plot and the prose—and gives readers interested in the drama of a high-value legal case a great reward for their attention.”
—Alan Cheuse, NPR, All Things Considered

“[Errors and Omissions] displays the keen eye and sure hand of a gifted writer . . . Memorable.”
—Tom Nolan, The Wall Street Journal

“It’s difficult to convey the mounting excitement with which I turned the pages . . . The writing [is] masterful, not one wasted word . . . A terrific read.”
—Sue Grafton