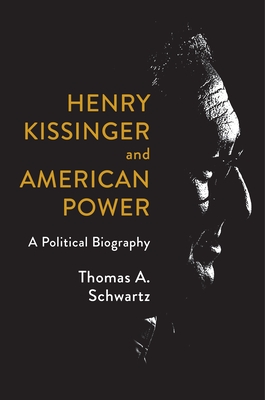 By Thomas A. Schwartz

[Henry Kissinger and American Power] effectively separates the man from the myths." —The Christian Science Monitor | Best books of August 2020

Over the past six decades, Henry Kissinger has been America’s most consistently praised—and reviled—public figure. He was hailed as a “miracle worker” for his peacemaking in the Middle East, pursuit of détente with the Soviet Union, negotiation of an end to the Vietnam War, and secret plan to open the United States to China. He was assailed from the left and from the right for his indifference to human rights, complicity in the pointless sacrifice of American and Vietnamese lives, and reliance on deception and intrigue. Was he a brilliant master strategist—“the 20th century’s greatest 19th century statesman”—or a cold-blooded monster who eroded America’s moral standing for the sake of self-promotion?

In this masterfully researched biography, the renowned diplomatic historian Thomas Schwartz offers an authoritative, and fair-minded, answer to this question. While other biographers have engaged in hagiography or demonology, Schwartz takes a measured view of his subject. He recognizes Kissinger’s successes and acknowledges that Kissinger thought seriously and with great insight about the foreign policy issues of his time, while also recognizing his failures, his penchant for backbiting, and his reliance on ingratiating and fawning praise of the president as a source of power. Throughout, Schwartz stresses Kissinger’s artful invention of himself as a celebrity diplomat and his domination of the medium of television news. He also notes Kissinger’s sensitivity to domestic and partisan politics, complicating—and undermining—the image of the far-seeing statesman who stands above the squabbles of popular strife.

Rounded and textured, and rich with new insights into key dilemmas of American power, Henry Kissinger and American Power stands as an essential guide to a man whose legacy is as complex as the last sixty years of US history itself.

Thomas A. Schwartz is Distinguished Professor of History at Vanderbilt University, where he specializes in the foreign relations of the United States. He has served on the U.S. State Department's Historical Advisory Committee and as president of the Society of Historians of American Foreign Relations. Henry Kissinger and American Power is his third book.

"A very fine political biography . . . Schwartz also separates his work from most others. He tackles an angle that is often overlooked in the never-receding field of Kissingerology: how domestic political concerns and necessities inform and shape foreign policy discourse and policies. In Schwartz’s apt and original rendering, Kissinger the realist intellectual is in fact a quintessential 'political actor'." —Mario Del Pero, The Washington Post

"Drawing on a vast amount of primary sources (including interviews with the man himself), Schwartz carefully charts Kissinger's evolution as one of the 20th century's most controversial statesmen . . . Throughout all this, Schwartz always remembers to add darkly fascinating personal elements." —Steve Donoghue, The Christian Science Monitor

"This intellectually challenging but masterfully written biography focuses on Kissinger's political life, especially the 'personalization' of foreign affairs that he came to typify . . . A sophisticated, well-textured study of a major figure in American political history." —Mark Levine, Booklist (starred review)

"[A] deeply researched, first-rate narrative . . . [Schwartz] bridges those who accuse Kissinger of being a war criminal for his politics toward Vietnam, Cambodia, and Chile, and those who praise his negotiations with China, the Soviet Union, and the Middle East . . . [A] richly detailed investigation." —Karl Helicher, Library Journal (starred review)

"An accessible account which more than fulfils its . . . objective of reintroducing Kissinger to a younger generation . . . [Schwartz's] assessment is balanced, steering a course between the thundering moral condemnation and extreme praise which alternately characterize much of the existing literature . . . Precisely because the author’s approach lacks the rhetorical bombast of other accounts, some criticisms seem all the more incisive . . . Where Schwartz excels is in presenting Kissinger’s preoccupation with the political optics of decision-making as part of a larger pattern of self-interested behaviour." —Andrew Payne, International Affairs

"[An] even-handed biography . . . Schwartz skillfully illustrates the complex dynamics between [Kissinger and Nixon] as Kissinger’s fame and regard rose, culminating in a Nobel Peace Prize, and Nixon’s influence ebbed during the Watergate scandal . . . [An] accessible account [that] serves as a worthwhile introduction to Kissinger and the geopolitics of the 1960s and ’70s." —Publishers Weekly

"Focused, readable, and tightly constructed . . . [Schwartz] doggedly follows the facts where they lead and paints warts where they appear." —David P. Goldman, Claremont Review of Books

"To re-examine Henry Kissinger requires balance and perspective, and these Thomas Schwartz supplies in his masterful account. Balance between a focus on the man and an understanding of the domestic and international constraints and opportunities; perspective in using our current knowledge without being blinded by hindsight. Both those coming to the story for the first time and experts will learn from Schwartz’s treatment." —Robert Jervis, author of How Statesmen Think

"Henry Kissinger has been deified and demonized but rarely understood. With a shrewd eye worthy of his subject, Thomas A. Schwartz has given us a fair-minded, savvy, highly readable portrait of the most fascinating statesman in American history." —Evan Thomas, author of Being Nixon and coauthor with Walter Isaacson of The Wise Men

"Henry Kissinger and American Power is impeccably researched and elegantly written. Thomas Schwartz sheds fresh light and understanding on the life of one of the most influential figures in recent American history and on an era that spans the Cold War to Covid-19." —H.R. McMaster, author of Dereliction of Duty and Battlegrounds: The Fight to Defend the Free World and former National Security Advisor

"In this superb biographical study, Thomas Schwartz achieves two paramount aims. He gives an account of Kissinger’s life and career for a younger generation and others who may know little or nothing about him; and for connoisseurs of Kissinger as National Security Adviser and Secretary of State, he provides candid insight and unexpected revelations into one of the remarkable figures of our time. This is a balanced and fair-minded book—readable and reliable, ideal for the general reader and scholars alike." —Wm. Roger Louis, Kerr Chair in English History and Culture at the University of Texas and former President of the American Historical Association

"When it comes to Henry Kissinger, we’ve had more than our fill of hagiographies and hatchet jobs. Now, at last, Thomas A. Schwartz gives us real history: a subtle, shaded, eye-opening portrait of a 'personality in power.' Henry Kissinger and American Power captures one of America’s most controversial and important diplomats in all his dimensions—as a serious geopolitical thinker, a skilled bureaucratic infighter, a relentless courtier of power, and a virtuoso of self-promotion. This book is a major contribution to the historical literature." —David Greenberg, professor of history at Rutgers University and author of Republic of Spin and In Nixon's Shadow

"Thomas Schwartz's superbly researched political biography reveals the brilliance, self-serving ego, and vulnerability of America's most remarkable diplomat in the twentieth century, even as it provides a history of U.S. engagement in global politics as it moved beyond bipolarity." —Charles S. Maier, research professor of history at Harvard University and author of Once Within Borders and Recasting Bourgeois Europe

“This magnificent book accomplishes the impossible. It is a beautifully written and exhaustively researched biography of Henry Kissinger, one of the most influential and controversial diplomats in American history. Thomas A. Schwartz’s account will appeal to an academic audience as well as a more general one and will disappoint neither. Schwartz expertly illuminates Kissinger’s career, succumbing neither to partisan praise nor polemics, enabling readers to reach their own conclusions about this formidable statesman.” —Diane B. Kunz, author of Butter and Guns: America’s Cold War Economic Diplomacy

"A successful foreign policy in America’s messy democracy requires savvy, often manipulative, maneuvers at home. Thomas Schwartz’s compelling biography unravels the many political threads that Henry Kissinger spun to weave a new and enduring relationship between the United States and countries in South America and the Middle East as well as Russia and China. Anyone interested in how American foreign policy is actually made must read this book." —Jeremi Suri, author of Henry Kissinger and the American Century