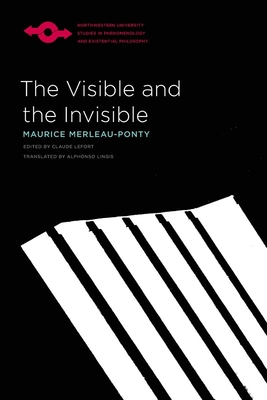 The Visible and the Invisible contains the unfinished manuscript and working notes of the book Merleau-Ponty was writing when he died. The text is devoted to a critical examination of Kantian, Husserlian, Bergsonian, and Sartrean method, followed by the extraordinary "The Intertwining--The Chiasm," that reveals the central pattern of Merleau-Ponty's own thought. The working notes for the book provide the reader with a truly exciting insight into the mind of the philosopher at work as he refines and develops new pivotal concepts.

Maurice Merleau-Ponty  (14 March 1908 – 3 May 1961) was a French phenomenological philosopher, strongly influenced by Karl Marx, Edmund Husserl and Martin Heidegger in addition to being closely associated with Jean-Paul Sartre (who later stated he had been "converted" to Marxism by Merleau-Ponty ) and Simone de Beauvoir. At the core of Merleau-Ponty's philosophy is a sustained argument for the foundational role that perception plays in understanding the world as well as engaging with the world. Like the other major phenomenologists, Merleau-Ponty expressed his philosophical insights in writings on art, literature, linguistics, and politics. He was the only major phenomenologist of the first half of the twentieth century to engage extensively with the sciences and especially with descriptive psychology.