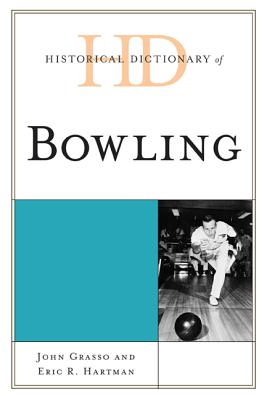 Loggats, kayles, quilles, skittles, half-bowl and ninepins were all early forms of games in which the goal was to knock down small standing objects from a distance by rolling or throwing another object at them. Archaeologists have found items from Egypt around 5200 B.C. that included small stone balls and narrow pins that were possibly used for a game. Additional research has disclosed that Polynesians played a similar game, using small elliptical balls and round flat stone disks, and, like modern-day bowling, a sixty-foot throwing distance. The Historical Dictionary of Bowling contains a chronology, an introductory essay, appendixes, and an extensive bibliography. The dictionary section has over 500 cross-referenced entries on both male and female bowlers, amateur and professional, bowling coaches, writers and other contributors to the sport of bowling; descriptions and results of major tournaments and terminology of the sport. This book is an excellent access point for students, researchers, and anyone wanting to know more about the sport of Bowling.

John Grasso, an Olympic historian and Treasurer of the International Society of Olympic Historians, has written on boxing, wrestling, basketball, tennis, and football and has traveled extensively--visiting more than 40 countries and attending eight Olympics Games. Eric R. Hartman is a bowling connoisseur, who has followed professional bowling as a casual observer for years. His interest was ignited after watching Pete Weber's memorable win at the 2012 U.S. Open. His other sports interests include golf, baseball, and ice hockey, with particular attention to Detroit's many professional teams.