History Matters: Patriarchy and the Challenge of Feminism (Paperback) 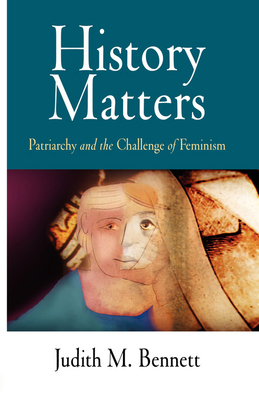 History Matters: Patriarchy and the Challenge of Feminism (Paperback)

Written for everyone interested in women's and gender history, History Matters reaffirms the importance to feminist theory and activism of long-term historical perspectives. Judith M. Bennett, who has been commenting on developments in women's and gender history since the 1980s, argues that the achievement of a more feminist future relies on a rich, plausible, and well-informed knowledge of the past, and she asks her readers to consider what sorts of feminist history can best advance the struggles of the twenty-first century.

Bennett takes as her central problem the growing chasm between feminism and history. Closely allied in the 1970s, each has now moved away from the other. Seeking to narrow this gap, Bennett proposes that feminist historians turn their attention to the intellectual challenges posed by the persistence of patriarchy. She posits a "patriarchal equilibrium" whereby, despite many changes in women's experiences over past centuries, women's status vis- -vis that of men has remained remarkably unchanged. Although, for example, women today find employment in occupations unimaginable to medieval women, medieval and modern women have both encountered the same wage gap, earning on average only three-fourths of the wages earned by men. Bennett argues that the theoretical challenge posed by this patriarchal equilibrium will be best met by long-term historical perspectives that reach back well before the modern era. In chapters focused on women's work and lesbian sexuality, Bennett demonstrates the contemporary relevance of the distant past to feminist theory and politics. She concludes with a chapter that adds a new twist--the challenges of textbooks and classrooms--to viewing women's history from a distance and with feminist intent.

A new manifesto, History Matters engages forthrightly with the challenges faced by feminist historians today. It argues for the radical potential of a history that is focused on feminist issues, aware of the distant past, attentive to continuities over time, and alert to the workings of patriarchal power.

Judith M. Bennett is Professor of History at the University of Southern California. She is the author of numerous books, including Ale, Beer and Brewsters in England: Women's Work in a Changing World, 1300-1600 and Women in the Medieval English Countryside: Gender and Household in Brigstock Before the Plague. She is coeditor, with Amy M. Froide, of Singlewomen in the European Past, 1250-1800, also available from the University of Pennsylvania Press.