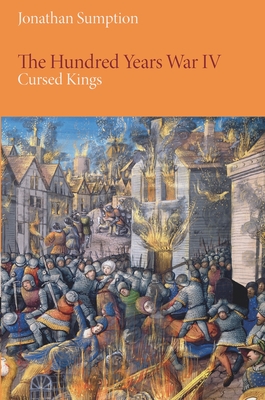 Jonathan Sumption's Cursed Kings is the eagerly anticipated fourth volume in what Allan Massie has called one of the great historical works of our time.

Cursed Kings tells the story of the destruction of France by the madness of its king and the greed and violence of his family. In the early fifteenth century France, Europe's strongest and most populous state, suffered a complete internal collapse. As the warring parties within fought for the spoils of the kingdom under the vacant gaze of the mad King Charles VI, the country was left at the mercy of one of the most remarkable rulers of the European Middle Ages: Henry V of England, who had destroyed the French army on the field of Agincourt in October 1415 and left most of France's leadership dead.

Sumption recounts in extraordinary detail the relentless campaign of conquest that brought Henry to the streets and palaces of Paris within just a few years. He died at the age of thirty-six in a French royal castle in 1422, just two months before he would have become king of France.

Six centuries later, these extraordinary events are overlaid by the resounding words of Shakespeare and the potent national myths of England and France. In Cursed Kings, Jonathan Sumption strips away the layers to rediscover the personalities and events that lie beneath.