Blood & Oil: A Prince's Memoir of Iran, from the Shah to the Ayatollah (Paperback) 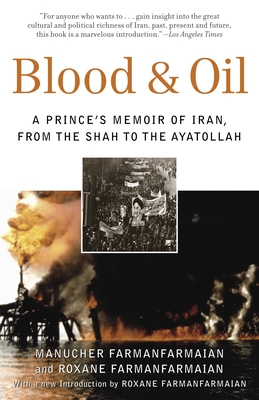 Blood & Oil: A Prince's Memoir of Iran, from the Shah to the Ayatollah (Paperback)


"        Told with energy, perception and great charm. . . . For anyone who wants     to . . . gain insight into the great cultural and political richness of Iran, past, present and future, this book is a marvelous introduction."
--Fred Halliday, Los Angeles Times

Iran was the first country in the Middle East to develop an oil industry, and oil has been central to its tumultuous twentieth-century history. A finalist for the PEN/West Award, Blood and Oil tells the epic inside story of the battle for Iranian oil. A prominent member of one of Iran's most powerful aristocratic families--so feared by Khomeini that the entire clan was blacklisted--Prince Manucher Farmanfarmaian was raised in a harem at the heart of Iran's imperial court. With wit and provocative detail, he describes the days when he served as the Shah's oil adviser and pioneered the partnership that resulted in OPEC. Beautifully written and epic in its scope, this scintillating memoir provides a fascinating history of modern Iran.

"        Distinguished by its political acumen, historical sense, and vividness of description and anecdote. It is also notable for a wry sense of humour. . . . Amid the euphoria about the development of the oilfields of Central Asia and the Transcaucasus, [its] lesson should be kept in mind."
--Anatol Lieven, Financial Times

"A book of stunning beauty . . . One of the best accounts of the cultural and political life of modern Iran, it is exquisite and intimate, rendered with art-istry and detail."                                                                     --Fouad Ajami
Prince Manucher Farmanfarmaian was born in Tehran in 1917, the thirteenth child in the vast harem of a Qajar patriarch. He studied petroleum engineering at Birmingham University in England before returning to Iran to become director general of petroleum, concessions, and mines after World War II. In 1958 he became director of sales for the National Iranian Oil Company. He also served on the board of the Consortium, the international oil conglomerate responsible for all of Iran’s export sales. A key signatory of the 1959 Cairo agreement that resulted in OPEC, he was Iran’s first ambassador to Venezuela. An avid collector of carpets, ancient Persian pottery, and travelogues by European adventurers to the Middle East, Manucher Farmanfarmaian was a frequent guest at the Shah’s court. After the Iranian Revolution, he became a citizen of Venezuela, where he lectured frequently on oil affairs at the Central University. He died in 2003 in Caracas. He was the father of two sons, Alexander and Teymour, and one daughter, Roxane.

Roxane Farmanfarmaian, an American-born journalist, is the former West Coast editor of Publishers Weekly. She is currently the editor of the Cambridge Review of International Affairs, and is a Donner Atlantic Studies Scholar at Cambridge University. A Princeton-educated journalist, she founded The Iranian, an independent news magazine in Iran, shortly before the revolution. She is the coauthor, with Manucher Farmanfarmaian, of Blood & Oil: A Prince's Memoir of Iran, from the Shah to the Ayatollah.