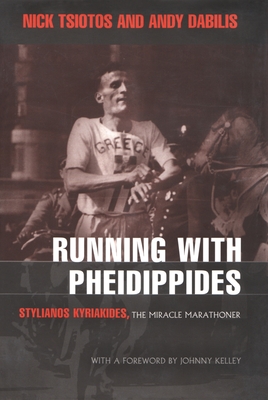 It is 1946. World War II is over. As the rest of Europe struggles to rebuild itself, Greece--which had bitterly resisted Nazi occupation--is ripped apart by civil war. Thousands are dead or dying of starvation. In the face of such epic disaster, one Greek athlete takes valiant action.

This is the true story of Stylianos Kyriakides, champion Greek runner who against all odds entered the 1946 Boston, Marathon, a race he had lost eight years before. Now Kyriakides ran not just to win, but to wake the world to the plight of his people. Although ravaged by hunger, Kyriakides pushed his wracked body to the limits. Boston doctors urged him to quit. "You will die in the streets," they warned. Fueled by dauntless devotion to his countrymen and bolstered by the love of his wife, the runner persevered and triumphed. But winning the marathon was only the first step. With characteristic grit, Kyriakides remained in the United States long enough to raise money, equipment, and medical supplies for his country. A grateful Greece proclaimed him a hero. Nearly one million welcomed him home. Drawing on interviews and unprecedented access to family photos and papers, the authors vividly chronicle the real-life drama of Kyriakides: a runner who raced not for gold or glory, but for the betterment of his people and the survival of his homeland. From the shadowy Berlin Olympics to the dark days of Nazi Greece and its aftermath, Running with Pheidippides speaks vividly of war and deprivation, of athletic competition and camaraderie, of genuine valor in a world bereft of heroes. "For those of us who were young and Greek-American," recalls former Massachusetts Governor Michael Dukakis, "his victory in the 1946 Boston Marathon and the response of so many Americans to his pleas for help for his people was one of the most searing experiences of our young lives."

Nick Tsiotos is a teacher in the Boston Public School System. Andy Dabilis is staff reporter and assistant editor at the Boston Globe. They are coauthors of Harry Agganis, "The Golden Greek": An All-American Story.