If It Takes All Summer: Martin Luther King, the KKK, and States' Rights in St. Augustine, 1964 (Hardcover) 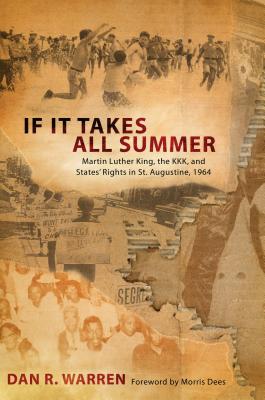 This memoir recounts the struggle against segregation in St. Augustine, Florida, in the early and mid-1960s. In the summer of 1964 the nation’s oldest city became the center of the civil rights movement as Martin Luther King Jr., encouraged by President Johnson, a southerner, who made the civil rights bill the center piece of his domestic policy, chose this tourism-driven community as an ideal location to demonstrate the injustice of discrimination and the complicity of southern leaders in its enforcement.  St. Augustine was planning an elaborate celebration of its founding, and expected generous federal and state support. But when the kick-off dinner was announced only whites were invited, and local black leaders protested. The affair alerted the national civil rights leadership to the St. Augustine situation as well as fueling local black resentment.  Ferment in the city grew, convincing King to bring his influence to the leadership of the local struggle. As King and his allies fought for the right to demonstrate, a locally powerful Ku Klux Klan counter-demonstrated. Conflict ensued between civil rights activists, local and from out-of-town, and segregationists, also home-grown and imported. The escalating violence of the Klan led Florida’s Governor to appoint State Attorney Dan Warren as his personal representative in St. Augustine. Warren’s crack down on the Klan and his innovative use of the Grand Jury to appoint a bi-racial committee against the intransigence of the Mayor and other officials, is a fascinating story of moral courage. This is an insider view of a sympathetic middleman in the difficult position of attempting to bring reason and dialog into a volatile situation.

Dan Warren (1925-2011) was a combat veteran of World War II. He was the elected State Attorney for Florida’s Seventh Judicial Circuit and a past president of the Florida Prosecuting Attorney’s Association; a former Daytona Beach City commissioner, city judge and Justice of the Peace, he was an original member of the Daytona Beach Speedway Authority created to build Daytona International Speedway serving 46 years as a member. Morris Dees, co-founder of the Southern Poverty Law Center, is currently its Chief Trial Counsel.

“Dan Warren’s excellent memoir sheds light not only on Southern transformations, but his own. In a moving passage, Warren recalls how his thinking about St. Augustine began to change as a result of his experiences. “I had held to the naïve and parochial view that the events unfolding in St. Augustine were only of local importance. In reality, St. Augustine was merely a symbol of the plight of blacks in a segregated society.” These personal reflections, coupled with his insider’s view of state and local level politics, makes Warren’s volume a unique addition to the scholarship on the Civil Rights Movement as well as a captivating and remarkable personal memoir.”
—Southern Historian


“This work provides a window into the role of law enforcement officials in the contentious battle over black civil rights, a topic not found in many other accounts. Warren’s memoir helps to reveal why the police allowed or avoided violence, the frustration and exhaustion of participants on all sides, and the constant maneuvering that took place to bring an end to the social unrest.”
—Journal of African American History


“This is an extremely interesting and important book. Its significance lies not only in the eye-witness descriptions of the civil rights campaign in St. Augustine in 1963–1965, but also in the fact that it is written from the perspective of a southern white official. Dan Warren’s account is invaluable in illuminating the relationship between money, the law, and political power in Florida at a time when blacks were virtually shut out of government.”—Adam Fairclough, Raymond and Beverly Sackler Chair of History and Culture of the United States, Leiden University

“This book offers a fascinating perspective on the events of 1964, written by a white racial moderate who attempted to find a middle ground between the rival forces. Dan Warren offers an interesting alternate perspective on the movement, balanced as he was between the competing forces of black protesters and a conservative white establishment. [He] provides an important analysis of the political fallout in St. Augustine once King left town.”—Clive J. Webb, Reader in North American History, University of Sussex