The Star and the Scepter: A Diplomatic History of Israel (Hardcover) 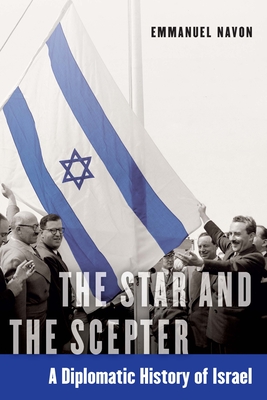 The first all-encompassing book on Israel’s foreign policy and the diplomatic history of the Jewish people, The Star and the Scepter retraces and explains the interactions of Jews with other nations from the ancient kingdoms of Israel to modernity.

Starting with the Hebrew Bible, Emmanuel Navon argues that one cannot grasp Israel’s interactions with the world without understanding how Judaism’s founding document has shaped the Jewish psyche. He sheds light on the people of Israel’s foreign policy through the ages: the ancient kingdoms of Israel, Jewish diasporas in Europe from the Middle Ages to the emancipation, the emerging nineteenth-century Zionist movement, and Zionist diplomacy following World War I and surrounding World War II.

Navon elucidates Israel’s foreign policy from the birth of the state in 1948 to our days: the dilemmas and choices at the beginning of the Cold War; Israel’s attempts to establish periphery alliances; the Arab-Israeli conflict; Israel’s relations with Europe, the United States, Russia, Asia, Africa, Latin America, the United Nations, and the Jewish diasporas; and how twenty-first-century energy geopolitics is transforming Israel’s foreign relations today.

Navon’s analysis is rooted in two central ideas, represented by the Star of David (faith) and the scepter (political power). First, he contends that the interactions of Jews with the world have always been best served by combining faith with pragmatism. Second, Navon shows how the state of Israel owes its diplomatic achievements to national assertiveness and hard power—not only military strength but economic prowess and technological innovation. Demonstrating that diplomacy is a balancing act between ideals and realpolitik, The Star and the Scepter draws aspirational and pragmatic lessons from Israel’s exceptional diplomatic history.

Emmanuel Navon is an international relations expert who lectures at Tel-Aviv University, at the Interdisciplinary Center Herzliya, and at Israel’s military academy. He is a fellow at the Jerusalem Institute for Strategy and Security and at the Kohelet Policy Forum and is a foreign affairs analyst for an Israel-based news TV channel. An expert on Israel’s foreign policy, Navon has published dozens of articles and three books, including From Israel with Hope: Why and How Israel Will Continue to Thrive and The Victory of Zionism: Reclaiming the Narrative about Israel’s Domestic, Regional, and International Challenges.

"The presentation and analysis of Israel's foreign policy since the establishment of the state is straightforward and illuminating. The book's fourth section, 'Israel on the world scene', which covers relations with Europe, the United States, Russia, Asia, Africa, Latin America, the United Nations and the Diaspora, includes interesting insights into some areas which are rarely covered."—International Affairs

"Demonstrating that diplomacy is a balancing act between ideals and realpolitik, The Star and the Scepter draws aspirational and pragmatic lessons from Israel’s exceptional diplomatic history."—Jerusalem Institute for Strategy and Security

"The Star and the Scepter should be required reading for every veteran and cadet in Israel’s Foreign Ministry, and will be of significant interest to informed and educated general readers concerned with the Jewish people’s and the Jewish state’s places in the world."—Brandon Marlon, Jerusalem Report

"Ambitious and comprehensive. . . . not only timely but overdue. This well-written and readable book sets out to and succeeds in providing a needed update of Israeli foreign policy."—Jonathan Spyer, Middle East Quarterly

"A welcome, accessible and readable contribution to our understanding of Israel's history and the Jewish people's history. . . . Deft analysis and explanation of Israel's relations with Asian states, its diplomatic initiatives in Africa, Latin America and the Arab world, make this book impressive and timely."—Seth J. Frantzman, Jerusalem Post

"A respected scholar of Israeli foreign policy. . . . Provides a sweeping portrayal of an ancient nation’s diplomacy—a diplomacy that should be more carefully studied in universities, both in Israel and abroad."—Shmuel Sandler, Israel Affairs

"Navon . . . has done a first-rate job of laying out the basics of Israeli diplomacy, its sources, methods, objectives and achievements. One could not ask for a better single-volume introduction to the history of the Jewish state's foreign policy."—David Rodman, Fathom Journal

"In many ways, diplomacy is like a global mixer dance, whereby countries swap partners and intel as they prance around the international stage. The way Emmanuel Navon maps the choreography of this field's multi-layered density is what makes his latest book, The Star and the Scepter: A Diplomatic History of Israel, a groundbreaking work. . . . The Star and the Scepter is a trusted companion for any individual seeking an in-depth understanding of Israel, Israel’s relations with other countries or region, or a quick reference to a historical event. . . . [It] proves itself to be an ever-growing staple for anyone invested in the future of the State of Israel."—Sruli Fruchter, Tradition

“This is a diplomatic history like no other. Emmanuel Navon takes us through the whole of the Jewish experience, from remotest antiquity to the present, drawing out the beliefs and events that explain Israel’s approach to foreign states and world powers today. If Israel is to flourish, even survive, it will have to learn the lessons this unique book teaches about the past. A tour de force.”—Martin Kramer, chair of Middle Eastern and Islamic studies, Shalem College

“Emmanuel Navon’s far-ranging work on Israeli and Jewish diplomacy through the centuries helps us better appreciate the political and moral implications of Israeli efforts to win acceptance among the nations.”—Yossi Klein Halevi, senior fellow, Shalom Hartman Institute, and author of Letters to My Palestinian Neighbor

“The underdeveloped field of Jewish political studies has much to gain from Emmanuel Navon’s ambitious, authoritative survey of Jewish diplomatic history from biblical origins to Israel’s latest oil and gas treaties. As well as providing reliable and firm guidance through minefields of explosive national history, the book develops a level-headed concept of modern Israeli foreign policy. It is a good read and a lasting resource.”—Ruth Wisse, emeritus professor of comparative literature, Harvard University

“With encyclopedic breadth this important, timely, and insightful book provides an extraordinary account of Israel’s determination to survive and flourish against all odds. It is a fascinating chronicle of both great events and individuals, from Jacob, Moses, and Jeremiah to Disraeli, Churchill, Ben Gurion, Kissinger, Golda Meir, Rabin, and Netanyahu.”—Hillel Neuer, executive director, UN Watch

“Devoid of jargon and rhetoric, Navon paints a fascinating overarching picture of Israel’s trials and tribulations in the journey toward normalization and acceptance among the comity of nations.”—P. R. Kumaraswamy, professor of Middle Eastern studies, Jawaharlal Nehru University, New Delhi

“The Star and the Scepter offers deep insight about how faith, history, and profound determination shape the unique diplomatic history of the Jewish people and the nation of Israel. Emmanuel Navon convincingly argues that Israel’s foreign policy is best understood in the light of history and faith, which he masterfully analyzes. I highly recommend The Star and the Scepter to those passionate about Israel, the Jewish people, and contemporary diplomacy in the Middle East.”—Kenneth Weinstein, president, Hudson Institute