A French Kiss with Death: Steve McQueen and the Making of Le Mans (Driving) (Hardcover) 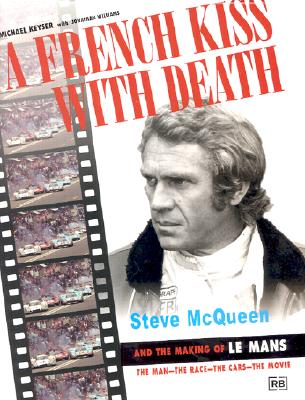 A French Kiss with Death: Steve McQueen and the Making of Le Mans: The Man--The Race--The Cars--The Movie examines the life of actor Steve McQueen, the films in which he appeared and his love affair with the many cars and motorcycles he owned during his lifetime. The book details the history of the 24 Hours of Le Mans and the backgrounds of Alfa Romeo, Ferrari, Lola, Matra and Porsche leading up to the 1970 Manufacturers' Championship Series. You're there when Steve hones his driving skills in his Porsche 908 at Willow Springs, Phoenix and Riverside; and at the 1970 Daytona 24 Hours, 12 Hours of Sebring, and 24 Hours of Le Mans, on which the film Le Mans was based. A major portion of the book gives a detailed behind-the-scenes account of the making of Le Mans--from start to finish--with insightful and entertaining stories from some of the key players involved in the making of the film, both from behind the cameras and behind the wheels of the more than 25 cars used during the production: Alfa Romeos, Corvettes, Chevrons, Ferraris, Porches, Lotas, & Matras. Chapters: 1. Author's Notes 2. Foreword 3. Wheels & Reels 4. The Man and the Machine 5. Twice Around the Clock 6. Havin' A Ball 7. Rules & Regulations 8. Alfa Romeo 9. Ferrari 10. Lola, 11. Matra 12. Porsche 13. 24 Hours of Daytona 14. Getting Competitive 15. 12 Hours of Sebring 16. Test Weekend 17. Cracks in the Facade 18. The Making of Le Mans.